The Russian's move to the Red Bull junior team came as a surprise given early favourite Antonio Felix da Costa. 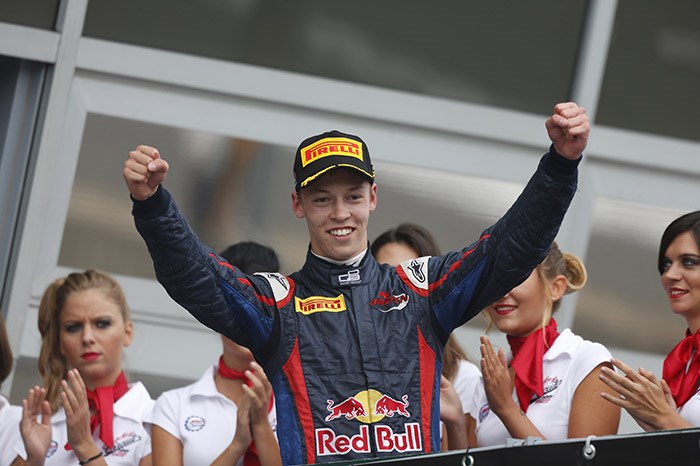 Daniil Kvyat will drive for Toro Rosso in Formula 1 next season, in a surprise move by the Italian team.

After weeks of speculation about which of Red Bull's youngsters would be promoted as replacement for Red Bull-bound Daniel Ricciardo in 2014, the Russian GP3 and European Formula 3 frontrunner has been given the nod ahead of early favourite Antonio Felix da Costa.

Kvyat has impressed in GP3 this season, and is currently second in the standings behind Facu Regalia with only the final round in Abu Dhabi remaining.

The 19-year-old drove for Toro Rosso in the Silverstone young driver test in July and also carried out a straightline test with Red Bull last week.

Red Bull's motorsport advisor Helmut Marko said Kvyat's impressive form throughout 2013 - which has included strong showings and a race win in F3 alongside GP3 - had convinced him and Toro Rosso's bosses that the Russian deserved the opportunity to show what he could do in F1.

"Whenever we put him in a car his efforts were remarkable," Marko said during an appearance on Red Bull's Servus TV channel.

"If a young driver proves talent, passion and a high level of work ethic, we give him a chance. It's that perspective that is why we chose Kvyat."

The decision to promote Kvyat to the Toro Rosso race seat has raised question marks over the future of Red Bull youngster Antonio Felix da Costa, who had been one of the favourites for the seat.

Da Costa endured a frustrating campaign in Formula Renault 3.5 this year, and it is unclear what he will now do for 2014.