The Finn was quickest on the first day of the Jerez test for Lotus F1. 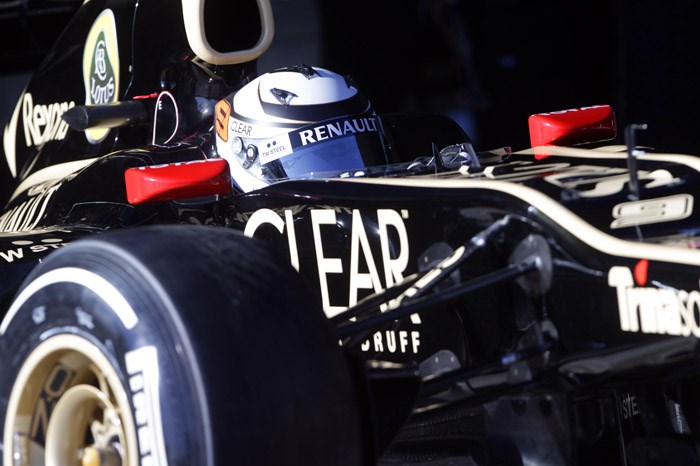 Kimi Raikkonen got his 2012 Formula 1 comeback off to a perfect start by topping the opening day of pre-season testing at Jerez.

The 2007 world champion went fastest straight out the blocks and was never displaced, as four fast stints in the morning allowed him to get down to 1m19.670s - faster than any testing laps at the Spanish track throughout 2011.

It was also faster than anyone else would manage all day, particularly with the afternoon proving slower than the morning.

Force India's Paul di Resta came closest to displacing Raikkonen at the top of the timesheets, missing out by just over a tenth of a second. A successful day was boosted by the fact that the British driver was able to complete over 100 laps.

Nico Rosberg, in charge of the 2011-spec Mercedes W02 in the morning, finished third fastest, narrowly ahead of Mark Webber in the new Red Bull RB8.

After a delayed start - the result of fog preventing rear wing components from arriving on time - the Australian was able to get within a second of Raikkonen in the afternoon.

Immediately after setting his best time Webber also blitzed the sector one speed trap, topping 300km/h for the first time - suggesting both he and the car have time in hand.

Daniel Ricciardo ended the day in fifth for Toro Rosso, although his session was cut short by a loss of oil pressure that brought about the first of the day's two red flags.

The second came with less than an hour of the session to run when Kamui Kobayashi pulled over on the back straight, having run out of fuel in his Sauber.

Unlike Ricciardo, the Japanese driver was able to rejoin shortly after, but could not improve his time and ended the day in seventh, behind Michael Schumacher – who replaced Rosberg at Mercedes for the afternoon.

Jenson Button and Felipe Massa ended the day eighth and ninth respectively for McLaren and Ferrari – Button 1.8s down on Raikkonen and Massa more than 3s off, having run with a periscope gauge attached to his roll bar for the entire day.

After a promising start, Heikki Kovalainen's day was cut short when his Caterham's starter shaft broke, and he finished the day in 10th. Only Williams driver Pastor Maldonado completed fewer laps – 25 to Kovalainen's 28 – but the Venezuelan was nevertheless able to secure 11th ahead of Pedro de la Rosa's 2011-spec HRT.