After being in contention for a podium early on, lost several places towards the end and eventually finished 14th. 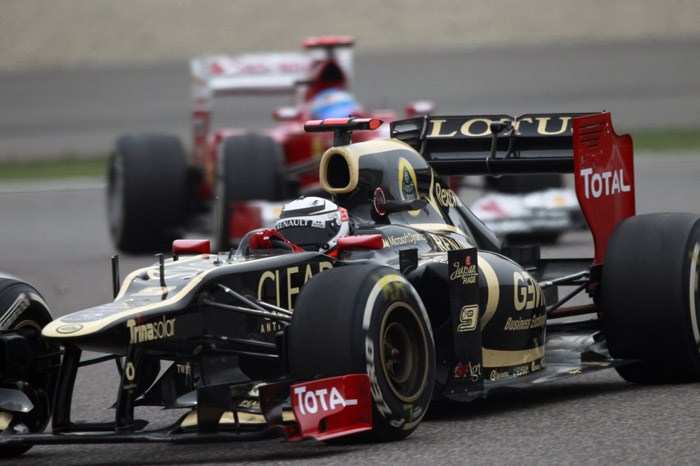 Kimi Raikkonen was left lamenting his strategy in the Chinese Grand Prix after dropping down to 14th position in the end, having run as high as second place in the last third of the race.

The Finn opted to stop just twice in the race, and the decision seemed to be working until his tyre performance dropped away completely in the final laps.

Raikkonen was fighting for a podium position, but lost several places and eventually finished 50 seconds behind race winner Nico Rosberg. Aftewards, the Lotus driver admitted the strategy had simply not worked.

"We tried to run two stops as it looked to be the fastest strategy and up until the last ten laps it was looking good, but we ran out of tyre performance at the end," said Raikkonen.

"I was stuck behind Felipe (Massa) for quite a while and couldn't get past as I wasn't fast enough in the right parts of the track to make a move.

"Even if I'd got past I don't think it would have made the greatest amount of difference to the final result. We had good pace in the race, we tried a different strategy and it didn't pay off today; it's is simple as that."

Team-mate Romain Grosjean scored his first points of the season after finishing in sixth position, the Frenchman delighted with his performance.

"It was a very good race, I really enjoyed it," he said. "Unfortunately I made a little mistake fighting with Mark (Webber) but overall it was a good performance.

"The car felt great and the team did an amazing job to give us such a big improvement from Friday, so I'm especially happy for the guys to be able to finish the race and get some good points on the board.

"To be up there fighting with McLaren and Red Bull is a great feeling and I'm happy to have got my season started properly. We've had high hopes since P3 on the grid in Melbourne, and now after a few setbacks it's time to aim higher."