Raikkonen fends off Verstappen and Hamilton to win US GP 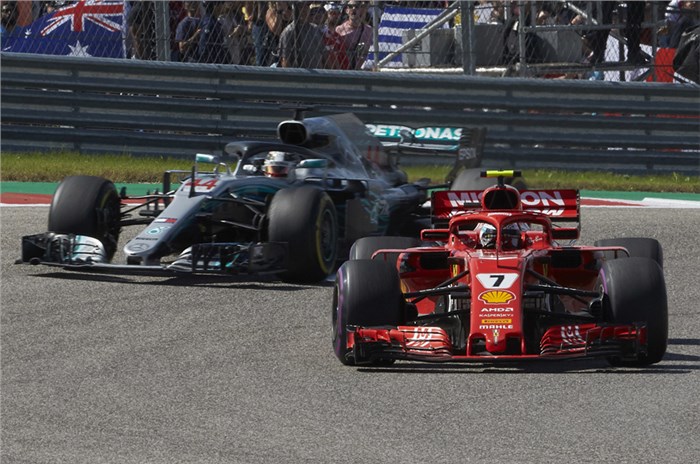 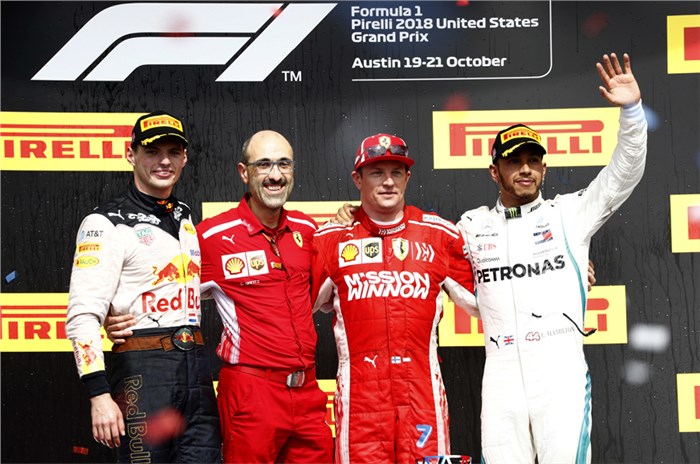 Lewis Hamilton will have to wait at least until the 2018 Mexican Grand Prix to clinch his fifth world title as Kimi Raikkonen stormed to victory at the Circuit of the Americas – the Finnish driver’s first race win since Australia 2013.

Starting the race from second place, Raikkonen muscled past poleman Hamilton at the start. Sebastian Vettel – who had to start from fifth place due to a penalty he picked up in the first practice session – was making his way up the order, but ended up spinning around while battling with Daniel Ricciardo for fourth place. That dropped Vettel all the down to 14th place and he had to spend the rest of the race recovering lost ground.

It ended up being another frustrating race for Ricciardo as his Red Bull soon came to a halt on the exit of the Turn 11 hairpin, triggering a virtual safety car. This is where varying strategies came into play as Mercedes decided to commit to a two-stop stop strategy and pit Hamilton under the virtual safety car, while Ferrari kept Raikkonen out. Hamilton resumed in third place, just nine seconds behind the Finn, and within three laps had taken second from team-mate Valtteri Bottas, who slowed down on the start-finish straight to let him by.

By lap 18 of 56, Hamilton was already on the back of Raikkonen again, but the Fin managed to keep him at bay before pitting - which proved crucial later on. Vettel stayed out until lap 26, ceding places to Raikkonen and Max Verstappen – who made rapid progress after starting from 18th place - as he struggled with fading tyres. Raikkonen's task was to stay within one pitstop - roughly 20s - of Hamilton, while Vettel began to catch Bottas for fourth position.

Hamilton’s lead was gradually eroded by Raikkonen and the Mercedes driver dived into the pits on lap 37, handing the race lead to Raikkonen. The rather late stop also allowed Verstappen and Bottas past Hamilton, who was now down in 4th place, 4.1s clear of Vettel.

Armed with fresh softs, Hamilton raced on to the back of his team-mate and was let through within two laps. That put Hamilton in third and he closed on to the back of Verstappen with seven laps to go, but was not able to make a pass as their battle culminated in an epic run of four corners side-by-side.

Hamilton ran wide as he finally attempted to pass Verstappen on the outside of the fast double-right near the end of the lap. Moments later, Vettel passed Bottas at the hairpin to slot into fourth. Hamilton needed to outscore Vettel by eight points to clinch the 2018 drivers’ world championship at Austin, but Vettel’s fourth place finish was enough for the title fight to continue into the Mexican GP.

Behind the frontrunners, Renault received a late boost in its quest in the constructors' championship as Nico Hulkenberg led home team-mate Carlos Sainz to finish sixth and seventh, respectively.

Esteban Ocon and Kevin Magnussen finish eighth and ninth, however, both drivers were disqualified from the race for separate fuel infringements. This handed eighth place to Sergio Perez, with Brendon Hartley and Marcus Ericsson rounding up the top 10.

The race saw four retirements overall - long before Ricciardo ground to a halt in his Red Bull, Fernando Alonso and Romain Grosjean had their races ruined on the opening lap. Alonso stopped in the pits after being wiped out by Lance Stroll on the entry to the “S’s”, while Grosjean locked up and clattered into Charles Leclerc's Sauber at the tight left-hander at the end of the back straight.

Stroll was given a drivethrough penalty for spinning Alonso, while Grosjean received a three-place grid penalty for the Mexican GP and one licence penalty point. The Hass driver is now just two penalty points away from being handed a race ban.