Quartararo bagged an important win, while Mir and Rins brought their factory Suzukis home in 2nd and 3rd. 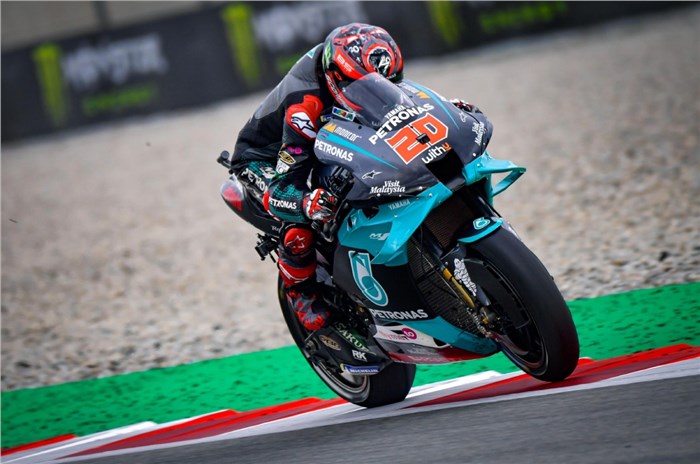 Petronas Yamaha rider Fabio Quartararo secured a stunning victory at the 2020 Catalan GP. The Frenchman has moved to the top of the 2020 MotoGP championship table after his latest win, with 108 points in the kitty.

. Rossi crashes out while running for 2nd place

. Joan Mir moves up to 2nd position in the championship

Quartararo made a decent start as the lights went out, with pole-sitter and teammate Franco Morbidelli leading the field into Turn 1. Monster Energy Yamaha's, Valentino Rossi also made the most of his front-row start, managing to keep the hard-charging Pramac Ducati rider, Jack Miller behind him through the first corner.

Behind the leading group, the drama unfolded as Danilo Petrucci influenced a crash while trying to recover from a near-crash. In doing so, Avintia Ducati's, Joan Zarco, who was on Petrucci's tail, made a mistake and slid off into the gravel, wiping out erstwhile championship leader, Andrea Dovizioso. The factory Ducati rider was screaming in frustration as he watched his championship hopes take a big hit.

As the laps progressed, Quartraro began to reel in Rossi, who was trying to preserve his Michelin softs for a late charge during the second half of the race.

The track at Barcelona, this year, had caught riders out due to low grip issues. In fact, the entire grid was running on the same tyres during the race. Hence, it was crucial to manage the tyres.

Meanwhile, a few laps later Quartararo managed to slipstream Rossi down the start-finish straight and pass him, going into Turn 1. The move was exactly like the ones Rossi, who has confirmed his move to Petronas Yamaha SRT for the 2021 MotoGP season, has pulled on his rivals in the past.

After a few laps, Quartararo made easy work of passing race leader Morbidelli, who by this time had begun facing tyre grip issues. Low grip led to Morbidelli making a mistake while slowing down from well over 300kph, going into the first turn and handing 2nd place to Rossi.

At this point, Rossi sensed his chances of a podium and possibly a win as he kept Quartararo within striking distance. The Italian looked stronger than ever but then, all of a sudden, 'The Doctor' lost the front of his Yamaha and crashed into the gravel. A visibly dejected Rossi threw his hands up in despair as back-to-back DNF's have affected his title hopes to quite an extent.

While the Yamaha boys were busy scrapping it out, Factory Suzuki Rider, Joan Mir, kept clawing his way up the field. Passing Miller and Morbidelli quickly, Mir rose up to 2nd and was closing in on Quartararo in the closing stages of the race. It goes to show how well the Suzuki manages to conserve its tyres over a race distance.

The young Mir, has been consistently proving his worth by converting poor grid positions into strong wins or even podiums. He could very well be challenging for the lead during races, if only he manages to put the Suzuki on a strong grid position on Saturday.

Meanwhile, it was cause for a double celebration for Suzuki as Alex Rins crossed the line in third, putting up a strong show in the latter half of the race.

After a string of poor performances over the last few races, Fabio Quartararo will be relieved to find himself at the head of the championship with 108 points, following this crucial victory. Suzuki's Joan Mir, is right behind Quartararo, with an eight-point deficit.

Monster Energy Yamaha's, Maverick Vinales, had another dismal Sunday outing, however, the Spaniard may find some solace in the fact that he is currently 3rd in the championship with 90 points in the bag.

The next round of the 2020 MotoGP World Championship will be held after two weeks at Le Mans, France.