Bagnaia took his first podium finish in 2nd place, while Mir pipped Rossi for 3rd place on the last lap. 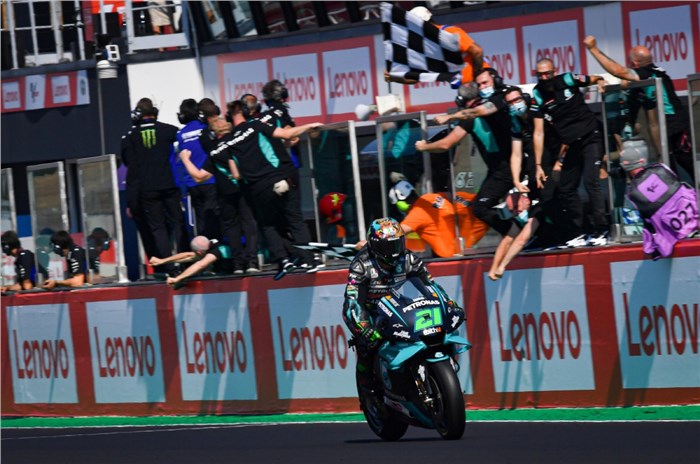 Franco Morbidelli took home his maiden MotoGP victory on home soil at the San Marino GP. The Italian crossed the line 2.217sec ahead of Francesco Bagnaia, who celebrated his first premier class podium. Joan Mir, meanwhile, clinched the final spot on the podium on the very last lap.

Yamaha had a spectacularly successful qualifying session, with its satellite and factory bikes taking the first four spots on the grid. Factory rider Maverick Vinales was on pole with the SRT Petronas Yamahas of Franco Morbidelli and Fabio Quartararo behind him.

As the lights went out, Morbidelli got the best start off the line and led the pack into the first corner. Valentino Rossi, who started 4th, got off to an equally impressive start and was right on his tail in 2nd place. Jack Miller followed closely in 3rd, with Vinales and Quartararo in tow.

The opening few laps were tightly contested and Rossi was gunning for the lead. However, he failed to make a decisive move past VR46 Academy protégé Morbidelli.

A couple of positions behind, Vinales, who had just set the lap record for the circuit a day earlier, was struggling to hold onto 4th place. He was the only one to select a hard rear tyre, and the choice seemed to be faltering his hopes of a strong finish.

Up in 3rd place, Miller was now within a second of the leading pair, and his teammate Bagnaia was just as quick. The Italian is still recovering from a fractured leg but managed to set the fastest lap on multiple occasions and soon made his way up the order.

Fabio Quartararo got past Vinales to move up to 4th place, but moments later he crashed at Turn 4. The Frenchman managed to get back on his bike and rejoined in 20th place. A few laps later, he entered the pits and switched bikes before heading out again. Unfortunately, in what seemed like a case of cold tyres, he crashed out again on his out lap. As a result, he is no longer the championship leader.

At the front, Morbidelli was comfortably holding onto the lead and the battle for the two spots behind him allowed him to pull a slight gap to the rest of the pack. Rossi and Miller were still holding onto 2nd and 3rd respectively, but Bagnaia and the two Suzukis of Mir and Alex Rins were on the charge.

On lap 12, Rins managed to move up to 3rd place and Bagnaia moved past Miller to take 4th place. The duo were 1.8sec behind Rossi in 2nd at this point. But, as the laps went by, they caught up with the nine-time World Champion and were right on his tail. Mir also began to pick up pace and joined the battle for a spot on the podium.

Drama in the closing stages

Morbidelli’s lead from Rossi continued to grow. It was clear that Rossi was not able to match the pace of the riders behind him, but he proved to be extremely hard to pass. Bagnaia managed a move past Rins and eventually got past Rossi, too.

By this point, Mir had closed the gap to the trio ahead of him. With six laps to go, Rins was struggling to get in front of Rossi despite his numerous attempts.

On the penultimate lap, Rins ran wide on the exit of turn 16 and this allowed his teammate, Mir, to get ahead of him. He now had his sights set onto the factory Yamaha in front of him. On the very last lap, Mir made a bold move down the inside at Turn 10, taking 3rd away from the Italian. Rossi tried to retaliate at the next couple of corners, but failed to do so, ending his hopes of a dream 200th podium on home soil.

Morbidelli became the fourth rider in six races this season to win his first MotoGP race, and the fifth different winner this season.

Rossi will be disappointed after losing out on the podium at such a late stage, but a 4th-place result sees him move to 6th in the championship standings, 18 points behind leader Andrea Dovizioso.  Speaking of, Dovizioso didn’t have the best race, finishing 7th, but it was enough to get him to the top of the standings after Quartararo’s race ended prematurely.

Next week, the MotoGP paddock returns to the Misano World Circuit Marco Simoncelli. As it stands, just 28 points separate the top 10 riders, making this one of the most closely contested seasons in recent times.