Their fifth-place finish and the victory for team-mates Jani/Dumas/Lieb - ensured they became Porsche's first world sportscar champions since 1986. 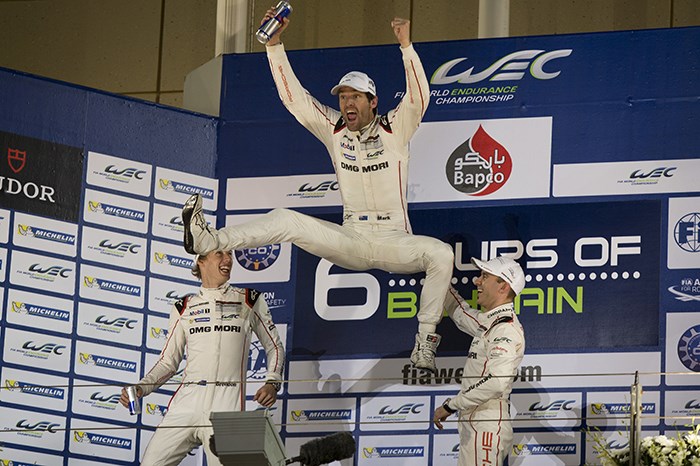 The 13-point lead that Webber and his team-mates took into the championship decider looked under threat as early as the opening hour, when Bernhard lost five laps in the pits with a throttle actuator problem on the #17 Porsche 919 Hybrid.

They were faced with having to claw their way back to fourth place because the #7 Audi R18 e-tron quattro with Lotterer at the wheel was able to establish itself in the lead of the race.

They made it up to fifth in the third hour courtesy of a delay for the #8 Audi with brake problems, which put them back in a position to seal the title, once the second Porsche was able to assert an advantage over the lead R18 in hour four.

Any chance of the victory the Audi drivers needed to take the title finally disappeared in the penultimate hour when Lotterer retook the wheel and had to come straight back to the pits with a wheel nut problem.

Webber and his team-mates survived a late scare in the fifth hour with a return of the actuator problem, but the issue was quickly fixed after another trip into the garage and the Australian was able to cruise to fifth position.

Webber said: "That shows the fighting quality of the team.

"We had a lot of problems and it was very stressful; we got the car home and we had enough points and enough wins to be world champions."

The final margin of victory for Jani, Dumas and Lieb, who recorded their first win of the season, was nearly 90 seconds.

Alex Wurz took third position on his final race before retirement together with Toyota team-mates Stephane Sarrazin and Mike Conway.

They headed home the sister Toyota TS040 HYBRID shared by Sebastien Buemi, Anthony Davidson and Kazuki Nakajima, which had been delayed by a series of slow pitstops, by just over a second in a team formation finish.

The #8 Audi driven by Lucas di Grassi, Loic Duval and Oliver Jarvis took a distant sixth place after a further delay with a late-race stop-go penalty for a tyre infringement.

LMP1 privateer honours were taken by the #13 Rebellion-AER R-One of Alexandre Imperatori, Dominik Kraihamer and Matheo Tuscher, which was enough to give them second place in the class points ahead of ByKolles CLM-AER P1/01 drivers Pierre Kaffer and Simon Trummer.

G-Drive Racing trio Sam Bird, Julien Canal and Roman Rusinov took the LMP2 drivers' championship in style with a fourth victory of the season aboard their Ligier-Nissan JSP2.

They battled with championship rivals KCMG, whose ORECA-Nissan 05 was shared by Nick Tandy, Richard Bradley and Matt Howson, for much of the race on the way to a 25-second victory.

Richard Lietz took the GT title with fifth place in GTE Pro aboard the Manthey Porsche 911 RSR he shared with Michael Christensen.

Combined with victory for Patrick Pilet and Frederic Makowiecki in the sister car, this was enough for Porsche to overhaul a four-point deficit to Ferrari in the manufacturers' standings.