The 15-year old from Mumbai, is also leading the German Karting Championship (DKM) currently with one round to go. 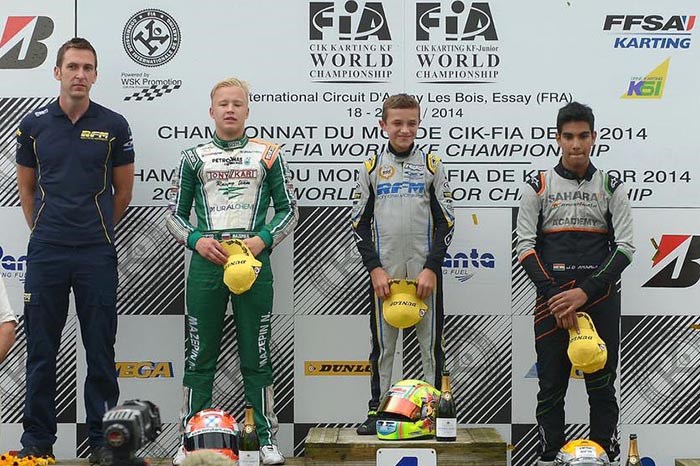 Indian karter Jehan Daruvala finished third at the CIK-FIA World Karting Championship final at Essay, France – making him the first Indian to ever stand on the podium in any FIA World Championship motorsport event across disciplines.

The 15-year old from Mumbai, who is also leading the German Karting Championship (DKM) currently with one round to go, recovered fabulously from a tough run up to the weekend to stand on the podium on his maiden World Title attempt.

76 drivers were in the fray in KF category, including reigning champion Tom Joyner and several top karters from European championships. Competition was slated to be extremely tough and the Sahara Force India F1 prodigy was looking forward to a weekend of learning on his first crack at the biggest prize in karting.

After showing top-five pace in practice, Daruvala managed to finish sixth in his first heat. But the second heat put him on the backfoot after an off-track moment and consequent loss of grip resulted in some contact with two of his competitors. The Indian was handed a 10-second penalty for the incident which pushed him down to 22nd in the result sheets.

Daruvala, driving for Ricky Flynn Motorsport, was slated to line up 15th for the pre-final.

With the pre-final race starting in extremely wet conditions, progression seemed on the cards. Daruvala executed a flawless drive, scything his way up the pack to slot himself in the top 10 on the extremely chaotic opening lap. In adverse conditions, Daruvala had consistent front-running pace which meant he continued to pick off his competitors as laps ticked past.

On lap four he was up to eighth, and gained a further two positions four laps later. He continued to press on and managed to consolidated fifth with four laps to go.

Podium looked like a definite possibility given Daruvala’s fifth place on the grid for the final. But as the green flag waved, the Indian amazingly disposed reigning World Championship Tom Joyner for the lead of the race. He went on to lead 9 laps before being passed by eventual winner Lando Norris. Daruvala then mounted a strong defense against Russian Nikita Mazepin, but the latter managed to squeeze past on the final lap, leaving the Indian to take the final podium spot.