The changes come in the wake of several spectacular tyre blow-outs at last weekend's British GP. 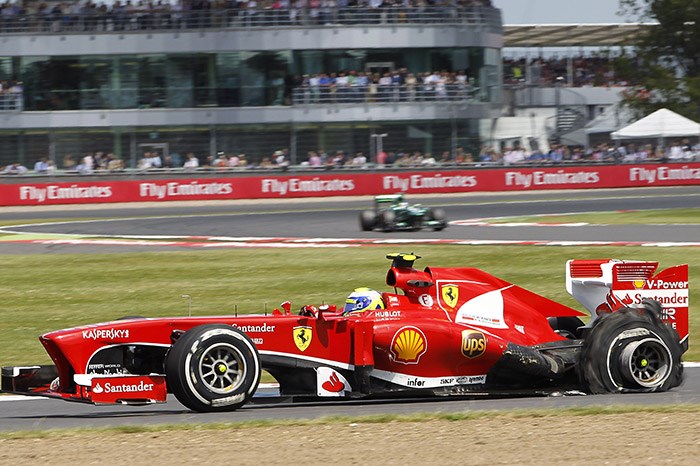 Pirelli is to introduce all-new tyres from the Hungarian Grand Prix, as well as push for rule changes, in a bid to prevent a repeat of the Silverstone tyre failures.

After 48 hours of detailed analysis at its Milan headquarters to understand why there were a series of spectacular blow-outs in last weekend's British GP, Pirelli has reacted with a major rethink of its policy.

For this weekend's German Grand Prix, teams will be given the Kevlar-belted rear tyres that were tested briefly at the Canadian GP.

Furthermore, teams will be banned from swapping the left and right tyres around, and strict limits will be imposed on camber and tyre pressures.

From the race at Budapest later this month, an all-new tyre that features a combination of the 2012 construction with the 2013 compounds will be introduced.

These new products will be tested for the first time at the forthcoming young driver test at Silverstone on July 17-19.

Pirelli believes that the British GP tyre failures were caused by a combination of factors and that they were unrelated to the delaminations it encountered earlier this season.

It claims that a combination of rear tyres being swapped (which put undue pressure on the wrong sidewall), low tyre pressures, extreme cambers and high kerbs at Silverstone - especially from The Loop - contributed to the failures.

To prevent a repeat, Pirelli wants it to be made mandatory that real time tyre data – including pressures and cambers – is made available for its engineers during a race.

It also wants limits on pressures and cambers to be enforced by the FIA.

Pirelli motorsport director Paul Hembery said: "What happened at Silverstone was completely unexpected and it was the first time that anything like this has ever occurred in more than a century of Pirelli in motorsport.

"These incidents, which have upset us greatly, have stressed the urgency of the changes that we already suggested – which will be introduced for free practice in Germany on Friday.

"We would like to acknowledge the willingness of the FIA, FOM, teams, and drivers to act quickly to find an immediate solution to the problem.

"In particular, the adoption of winter tests, arranged with the FIA, that are more suitable for tyre development, and the possibility of carrying out in-season testing will contribute to the realisation of tyres with increasingly improved standards of safety and performance."

Hembery is adamant that there are no safety issues with Pirelli tyres as long as teams use them correctly.

"I'd like to re-emphasise the fact that the 2013 range of tyres, used in the correct way, is completely safe," he said.

"What happened at Silverstone though has led us to ask for full access to real time tyre data to ensure the correct usage and development of tyres that have the sophistication we were asked to provide and extremely high performance that has lowered lap times by more than two seconds on average.

"While we wait for a change in the rules, we will introduce tyres that are easier to manage."