The multiple world champion expressed that the drivers having to drive below their limits to preserve tyres isn't what racing should be about. 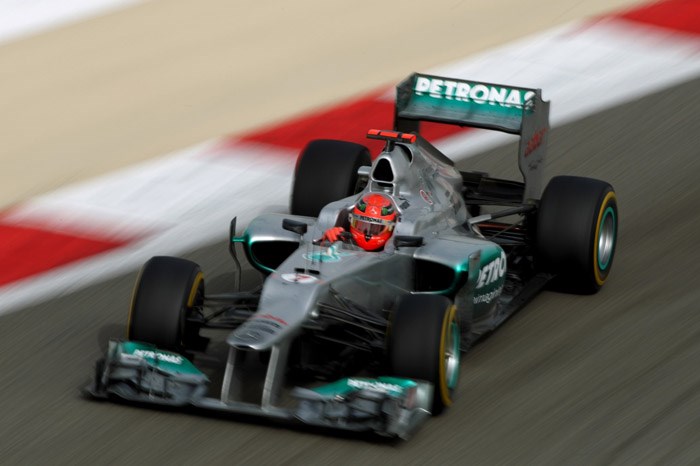 Pirelli says it is surprised at accusations from Michael Schumacher that the current generation of tyres are not allowing drivers to push their cars to the limit.

On the back of a frustrating afternoon in Bahrain, where Schumacher could not make the progress through the field that he had hoped for, the seven-time champion hit out at the way drivers are being forced to look after their tyres.

"The main thing I feel unhappy about is that everyone has to drive well below a driver's, and in particular, the car limits to maintain the tyres," he told BBC Radio 5.

"I just question whether the tyres should play such a big importance, or whether they should last a bit longer - and that you can drive at normal racing car speed and not cruise around like we have a safety car."

Pirelli's director of motorsport Paul Hembery said he was taken aback by those criticisms, especially because Schumacher had been so happy with the tyres throughout winter testing.

"I'm disappointed to hear those comments from someone of Michael's experience," he told AUTOSPORT. "Others were getting on with the job and getting their tyres to work. His comments during winter testing were that he was very happy with the tyres, and now he seems to have changed his tune."

Schumacher added in his post-race summary that he thinks Pirelli should reconsider its approach to tyres – because the problems of not being able to push to the limit were being experienced by too many people.

"I'm not happy about the situation, lets see what happens in future," explained the Mercedes driver. "If it would be a one-off car issue, then you could say it's up on us to deal with it.

"But basically it is everybody with maybe one or two exceptions. And if it is 80 per cent of the field that has this problem, then maybe the tyre supplier should think about that."