With a one-hour lead after his Peugeot team-mates encountered dramas Peterhansel had been able to drive conservatively through the final days. 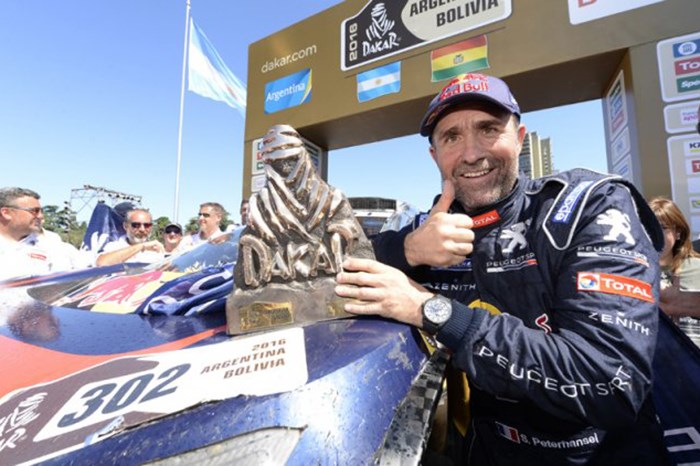 Stephane Peterhansel clinched his 12th Dakar Rally victory and Peugeot's first since 1990 with a calm run through the final stage on Saturday.

Having been left with a massive one-hour lead as his Peugeot team-mates Sebastien Loeb and Carlos Sainz encountered dramas during the second week, Peterhansel had been able to drive conservatively through the final days.

The concluding run back from Villa Carlos Paz was the same story, as Peterhansel came in seven and a half minutes slower than stage pacesetter Loeb to seal outright victory by 34m58s from last year's winner Nasser Al-Attiyah in the lead X-raid Mini.

Al-Attiyah's team-mate Mikko Hirvonen was a close second to Loeb on stage 13, following on from his maiden Dakar stage win on Friday.

He completed his first attempt at the event in fourth overall, between the Toyotas of 2009 winner Giniel de Villiers and Leeroy Poulter.

The big story of the 2016 Dakar had been Hirvonen's former World Rally Championship nemesis Loeb's form on his event debut.

The nine-time WRC champion led for most of the first week, before tumbling down the order following a crash and then a number of further tribulations when the rally moved into the dunes in its second half. Loeb eventually finished ninth.

Sainz looked like Peugeot's most likely victor once Loeb was delayed, only to retire from the lead on Wednesday when a spacer between his car's engine and gearbox broke.

In bikes, Toby Price took his maiden Dakar win, having run in the top 10 throughout the two weeks of competition.  in his debut last year, the Australian rode smartly to grab a clear win. Price, a good navigator impervious to pressure, which came especially from the Honda camp, wasted precious little time wandering around. The first Aussie to win the race, looked every bit the new Dakar boss in a category that is undergoing a major renewal.

The best finishing Sherco-TVS entry was that of French rider Florent Vayssade - who crossed the line in 27th place.