Perez's lap of 1m21.848s was achieved on a one-lap sprint on soft tyres 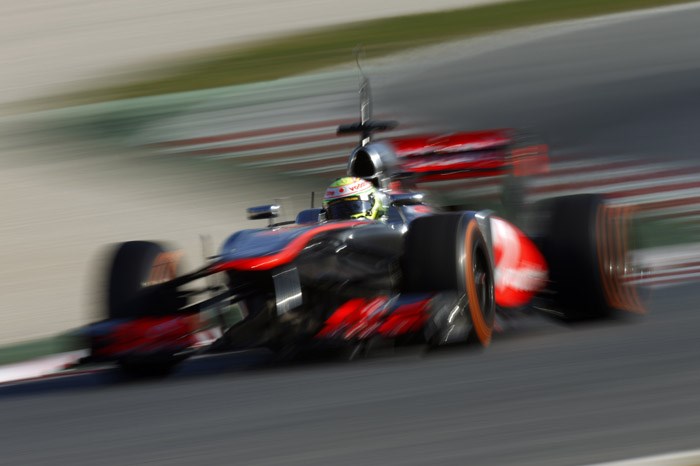 The Wednesday afternoon session featured few changes from the opening part of the day, but the most significant came early on.

Perez's lap of 1m21.848s was achieved on a one-lap sprint on soft tyres, and deposed morning pacesetter Sebastian Vettel by 0.349 seconds.

Red Bull attempted a race simulation in the afternoon, albeit one punctuated by lengthy sessions in the garage.

Vettel then came to a halt just past on the pit exit when he rejoined after his third pitstop of the run because of a loose wheel.

But the Red Bull was swiftly revived in the garage and able to rejoin for the final minutes of the session.

Vettel's issue caused one of only two red flags all day, the second coming when Max Chilton parked his Marussia on track in the closing minutes.

After losing the entire morning while his Lotus underwent a gearbox change, Kimi Raikkonen managed 43 laps in the afternoon.

He jumped to third quickest with his first outing and remained there, half a second behind Perez.

Lewis Hamilton and Fernando Alonso completed the top five, followed by Valtteri Bottas on his debut in the new Williams FW35.

Hamilton completed the most laps of the day with 121.