Dani Pedrosa wiped out the opposition for his first MotoGP victory of 2010 at Mugello. 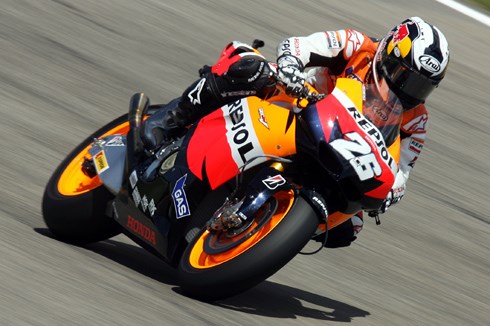 Dani Pedrosa wiped out the opposition for his first MotoGP victory of 2010 at Mugello. Pedrosa's Honda rocketed away from pole position and never looked back, as closest challenger Jorge Lorenzo, who had won the last two races for Yamaha, had no answer to his pace.

Pedrosa repeatedly smashed the lap record, lapping close to his qualifying speed, to extend a 7.8sec lead, after which he backed off to a 4sec victory at the finish. Lorenzo was caught up in the early stages with Pedrosa's Honda team-mate Andrea Dovizioso, who powered past him at Turn 1 at the start of lap four. Lorenzo got him back at the same place two laps later and managed to keep him at bay for the rest of the race.

A sensational battle for fourth place was won by Casey Stoner's Ducati. After a big moment at Turn 1 on lap 13, he sat back and watched Marco Melandri and Randy de Puniet swap the position before putting the hammer down on the final lap and jumping past both of them.

Melandri didn't lie down, however, and repassed Stoner before the Aussie got him back with a couple of corners remaining. Stoner crossed the line just 0.032s ahead of the Gresini Honda man, who had started down in 14th place.

Nicky Hayden was the race's biggest casualty when he crashed out on lap six while embroiled in battle with Melandri over fifth. "I blew the start, but picked a few guys off," said Hayden. "But coming into a downhill corner, where I was making up time, I pushed too hard. That one's on me, rider error. The set-up wasn't great, so I was just trying to ride through it."