Pedrosa takes a dominant victory followed by Lorenzo and Rossi. 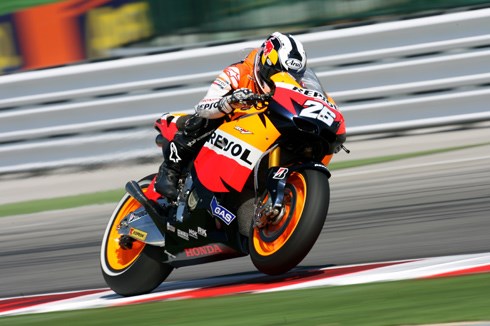 Dani Pedrosa took his second victory in a week with a dominant performance in the San Marino Grand Prix at Misano.

The Honda rider made a perfect start from pole position and was never headed, opening up a comfortable gap over the field and maintaining it throughout the race.

Championship leader Jorge Lorenzo had lost second to Casey Stoner into the first corner, but the Yamaha repassed the Ducati further around the opening lap and then settled into second place.

Stoner fell away from the leaders and had a dice with Valentino Rossi. The Yamaha ran wide when Rossi first dived past Stoner at Turn 8 on lap 10, but two laps later he completed a move through Turns 14 and 15 to secure the final podium spot. Honda's Andrea Dovizioso took fourth from Stoner soon afterwards.

At the end of the race the riders were informed that Shoya Tomizawa had died as a result of injuries sustained in a Moto2 accident this morning.

Nicky Hayden's miserable Misano record continued as he had a first corner collision for the third time in as many appearances. This time the Ducati rider tangled with Loris Capirossi's Suzuki, with the latter retiring on the spot and Hayden pulling out with damage a few laps later.