The Indian driver finished on the podium on his debut race in the series. 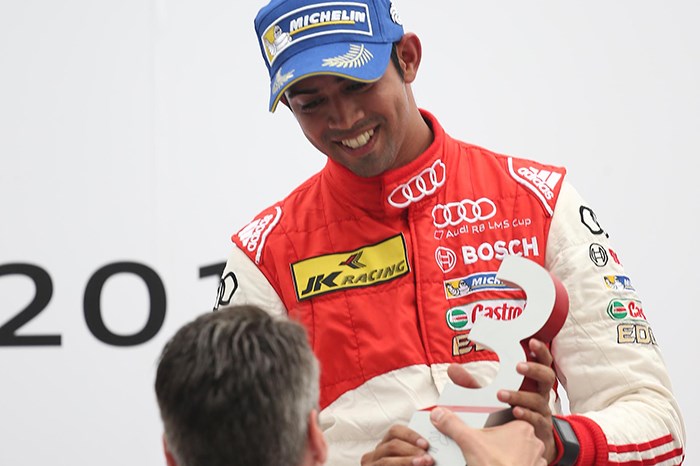 Reigning Audi R8 LMS Cup champion Alex Yoong of Audi TEDA Racing Team got his title defense off to a strong start today by winning the opening round of the 2015 season at the Zhuhai International Circuit from female driver Rahel Frey of Castrol Racing Team. Earlier, Frey had taken the series’ first Superpole after an eight-car qualifying shootout to lead the field from the rolling start.

Third across the line at the end of the 16-lap race was series newcomer and its first Indian driver, Aditya Patel of Team Audi R8 LMS Cup, taking the Four Rings Trophy win ahead of 2012 champion, Marchy Lee of Audi Hong Kong Team, 4th overall. FAW-VW Audi Racing Team’s Franky Cheng finished 5th, having just missed out on making the Superpole cut to start from 9th on the grid.

Said Rene Koneberg, Director of Audi Sport customer racing Asia: “The new Superpole shootout brings another strategic element to the Audi R8 LMS Cup, while also adding to the excitement amongst the drivers, teams as well as spectators. Alex’s superb victory demonstrates once again why he is our reigning champion, and Aditya has proven to be a front-runner on his debut.”

As the lights went out to herald the start of the Audi R8 LMS Cup 2015 season it was Yoong who stole the advantage – in part by using a Push-to-Pass – from Frey after she locked up and ran slightly wide. The Malaysian grabbed the lead and immediately set about pulling out a gap, with Frey and Patel giving chase.

As Yoong fought to pull a gap at the front of the pack, Frey held off Patel while keeping the Malaysian firmly in her sights. After an eventful start, with several drivers coming together and spinning off the track, Lap 4 saw the Safety Car collect the field after Tommy Wong of Starspeed Racing spun into the gravel. When racing resumed on Lap 6, Yoong made another quick getaway, while behind the leading three, Lee dived past Cheng and up to fourth.

“This is my first race in the series and I’m pretty happy with a podium, but I would have liked to have had a little more pace in qualifying. As the race went on, there was a lot going on; I had Marchy catching up from behind and that kept me on my toes, and I was also trying to plan how to catch Rahel. I used Push-to-Pass to catch Rahel and tried to make a move, but couldn’t make it stick", commented Aditya.

"The second race also looked good for a podium until it had to be stopped due to unsafe conditions. I’m looking forward to the next round in Korea!”