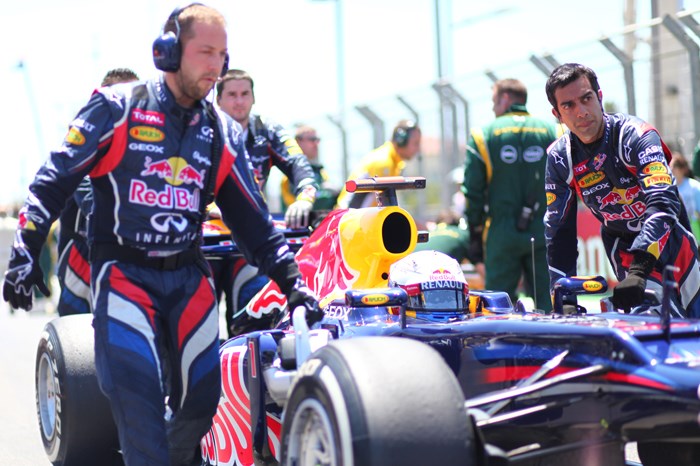 Sebastian Vettel and Romain Grosjean's retirements from the European Grand Prix were both caused by an overheating alternator, engine supplier Renault has confirmed, but the French car manufacturer is still uncertain about why the parts got too hot in the first place.

Renault has conducted a detailed examination of the Red Bull Racing and Lotus engines that failed in Valencia, and its conclusion points to the overheating parts cutting the electrical supply to the power units and forcing both drivers out. But despite knowing what caused the engines to shut down, Renault is conducting further tests this week to work out why the overheating issue reared its head in the first place.

Renault Sport F1 deputy managing director Rob White said: "We've checked over the parts thoroughly now and it seems that there were no obvious reasons for the failure, so we are conducting further tests on the dyno at Viry to replicate conditions and double checking the findings."

White said that investigations had concluded that the failures were not related to the mid-race safety car period - and in fact Vettel's engine actually lasted longer than it would have done because it had a few laps running slower than normal.

"We had evidence that the alternator on Sebastian's car was showing signs of overheating before the safety car period, but the slower speeds prolonged its life expectancy slightly," he said.

"Of course, when Sebastian went back up to racing speed the problem stepped up again and the result is now well known. With Romain's car, the problem occurred very suddenly some laps after the safety car had been withdrawn."

Renault plans to implement some changes to the alternators for the next race at Silverstone, as well as using another supply batch in case that was a factor in the problem.

"We are looking at several solutions," explained White. "The first is to use another batch of alternators for Silverstone across all our clients, or a slightly modified design. We are also looking at returning to an older specification of alternator from 2011. Then we are working across all our partner teams to potentially introduce some mechanical and cooling solutions, or changing a few settings on acceleration maps so the running is less severe.

"All of these will be in evaluated between now and Silverstone, plus we will also look at everything after Friday running and see what additional measures we may need to take."