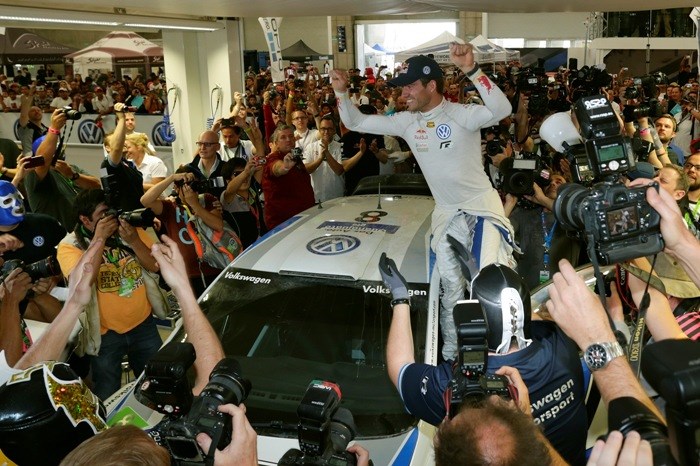 Sebastien Ogier completed his domination of Rally Mexico as he wrapped up victory and a maximum score on Sunday's final loop of stages.

Ogier had a scare after the morning's opening Guanajuatito stage when he had to spend 20 minutes fixing a sensor issue on his Volkswagen.

With that resolved, Ogier went on to win the following bonus-points power stage and win outright by over three minutes from Mikko Hirvonen's Citroen.

Having won two of this year's three rallies, Ogier already holds a 44-point cushion over nearest title rival Hirvonen. The now part-time Sebastien Loeb is still second in the points, 31 down on Ogier.

Hirvonen started Sunday under pressure from Thierry Neuville. The Belgian went flat-out to try and snatch second place, but a trip off the road on the first stage convinced him to back off and let Hirvonen take the position.

That was comfort for his M-Sport Ford team after Mads Ostberg encountered electrical problems when running second on Saturday, having earlier fought Ogier for the lead.

Evgeny Novikov recovered to 10th following an ECU gremlin on day one, while Nasser Al-Attiyah produced one of his best World Rally Car drives yet in the fourth M-Sport entry to take fifth, having matched fourth-placed Dani Sordo's pace for much of the weekend.

On what is currently a one-off in Khalid Al Qassimi's regular Citroen, Chris Atkinson recovered from leg one steering damage to take sixth.

Seventh was still a career-best for Ken Block, while Production champion Benito Guerra must wait to see if eighth is sufficient to secure the full-time top-class drive his sponsors have hinted at.

While one VW driver celebrated 28 points, Ogier's team-mate Jari-Matti Latvala had to settle for one power stage bonus point, having broken his suspension just three corners into Friday's first stage.