The VW driver insisted he was managing the gap and had more speed in hand. 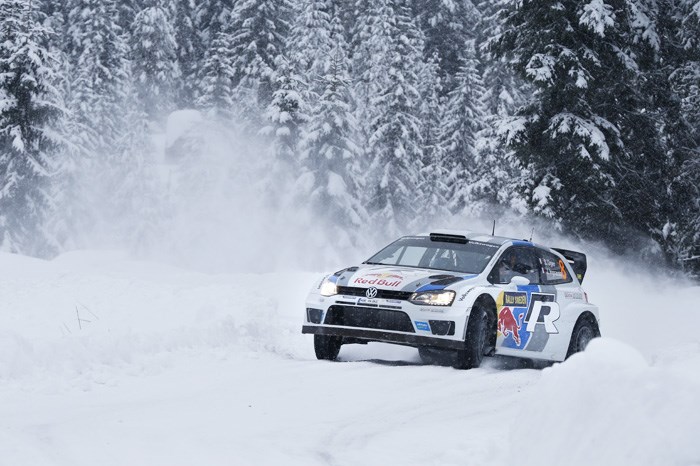 Ogier had established a half-minute margin on the opening day, but Loeb kept him within sight thereafter and was edging closer on Sunday.

The VW driver insisted he was managing the gap and had more speed in hand.

He proved that on the first stage after Sunday's mid-morning regroup, outpacing Loeb's Citroen by three seconds on the short Kirkener then vaulting 35.8s clear when Loeb made a mistake on the following Finnskogen stage.

Winning the power stage as well gave Ogier a 41s victory margin, a maximum 28-point score and the championship lead.

Having spent 2012 in a Super 2000 Skoda while VW prepared its World Rally Car, Ogier's Sweden win was his first triumph since the 2011 Rally of France 17 months ago.

The result was also only the second time a non-Scandinavian driver had won Rally Sweden, following Loeb's 2004 triumph. The French one-two meant this was the worst result for Scandinavians in the event's history.

Mads Ostberg was top 'home' driver (several stages running in his native Norway) in third. He looked quick enough to fight for victory on Friday morning as he recovered from a penalty for delays incurred while fixing an overheating problem on his Qatar M-Sport Ford.

But after briefly challenging Loeb, Ostberg became embroiled in a long battle with the second VW of Jari-Matti Latvala for third. Latvala had been second for a spell, before ending up six seconds behind Ostberg in fourth.

Evgeny Novikov looked set for a comfortable fifth place until he rolled and lost 10 minutes with three stages to go.

That handed the final top six spots to his Qatar M-Sport team-mates Thierry Neuville and Juho Hanninen, the latter another man to spend some time off the road.

Loeb will not now reappear until Argentina in May, leaving Citroen's title challenge in the hands of Mikko Hirvonen and Dani Sordo.

Both made mistakes in Sweden. Hirvonenwent off on the first full-length stage and was consigned to a 16th-place finish. Sordo crashed on both Friday and Sunday, the latter error ending his rally.

At the foot of the top 10, Saudi Arabian driver Yazeed Al Rahji took a surprise WRC2 win on the snow after a long dice with Anders Grondal, whose Production Subaru was no match for Al Rahji's RRC Ford.