Narain to debut in NASCAR racing

Narain set to be the first Indian racer to take part in NASCAR series. 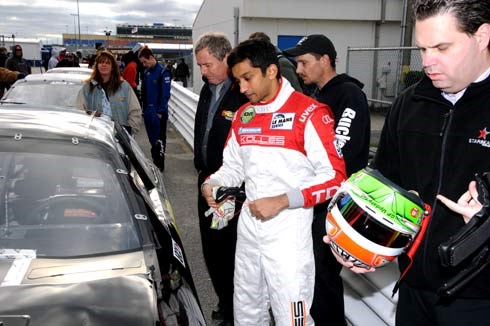 Narain Karthikeyan is set to make his NASCAR debut in the Camping World Truck Series at artinsville in two weeks' time.

He has inked a deal to compete for newly-formed Starbeast Motorsports in a number of races this year, starting March 27 at NASCAR's shortest and slowest oval.

Narain has most recently raced in the Le Mans Series, tested an ARCA car for Starbeast last December at Daytona and he is now set to follow in the footsteps of Juan Pablo Montoya, Scott Speed and Nelson Piquet by making a transition into stock cars.

"The opportunity to compete in a NASCAR series is a dream come true for me," Narain said. "I have raced all over the world, but this is a different kind of challenge for me and I look forward to learning everything I can about racing in this environment. NASCAR is known for its passionate fans. I am excited to be introducing India to this sport and hope to help develop an equally passionate fan base there."

After being India's first F1 driver, Narain will now also become the first Indian NASCAR racer. He has some stock car experience from outings in the now defunct Speedcar Series, which used cars similar to NASCAR Nationwide Series machinery, but did not feature any oval events.

Starbeast Motorsports will field the #60 truck from Wyler Racing after entering an agreement with the established Truck Series outfit. The car has been driven by experienced Stacey Compton in the first two races of the year, finishing seventh at Daytona and 19th at Atlanta.

According to a team statement, Starbeast Motorsports is focused on bringing NASCAR to the international community through foreign drivers, with Narain at the centre of its efforts to grow the sport in India.

"After his success in Formula 1, Narain has become one of India's most popular athletes and the obvious choice to introduce NASCAR to the subcontinent," said team founder Miguel Abaroa. "His story is that of a motorsports pioneer, and this next chapter will be his most compelling."

Compton will serve as a driver coach to assist Narain as he makes the transition from open-wheel racing to NASCAR.