The Indian returns to F1 full-time in 2012 with the Spanish squad. 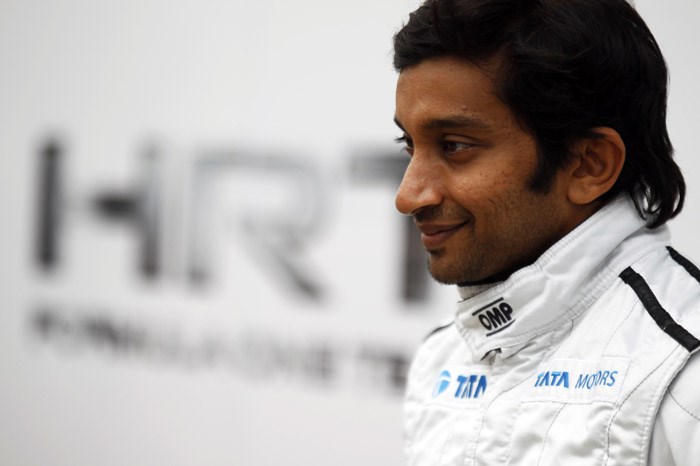 Narain Karthikeyan has signed up for the 2012 Formula 1 season with HRT F1 team, completing the Spanish team's line up for the forthcoming season.

Narain will partner Spaniard Pedro de la Rosa at the outfit in his second season with the squad - having completed a strong outing at the inaugural Indian GP last October.

The team will return to action next week at the first official preseason tests, which take place in Jerez, where Pedro de la Rosa will be the only driver to take to the wheel. Narain Karthikeyan will join the team for the second tests in Barcelona, which will be held from the 21st to the 24th of February at the Circuit de Catalunya.

HRT has undergone major structural changes since it was acquired by private equity firm Thesan Capital in July last year. With experienced figures like former Spanish F1 driver Luis Pérez-Sala (who was appointed Team Principal in December) and the experienced Pedro de la Rosa, Narain is looking forward to the season and contributing to the team's progress.

“It has taken a lot of hard work to make this happen but I am absolutely elated to feature on the 2012 grid. We had a strong outing at the Indian GP which confirmed, to me as well as others, that I am still capable of competing in Formula 1”, asserted Narain.

“Thus I have been training hard since the end of 2011, ensuring I was ready for the rigours of F1 if an opportunity arose."

"It is no secret how difficult the situation has been in Formula 1 right now, so I wanted to be as ready as I could be. There were many of ups and downs and many a day I just threw up my hands and gave up", said Narain, elaborating on the off-season uncertainty.

"But  I am glad though that eventually everything worked out and together with the new management and direction at HRT there is definite potential for progress.”

"We need to understand that F1 is new to India, we hosted our first race only last year which was a resounding success. To build on that momentum, an Indian driver will certainly keep the interest engaged throughout the season. I am proud to secure an opportunity to forge a stronger connection between India and Formula 1 once again”.

Team Principal Luis Pérez-Sala is convinced of Narain's ability as well, “I am pleased to count on Narain for this season, as he will contribute to continuity and stability. He is a quick, intuitive and secure driver who met his expectations despite a lack of continuity last year."

He further quipped, "Of the eight Grand Prix races he contested in 2011, he only failed to finish on one occasion and had a great performance in the last race he took part in. I’m sure that the fact that he will continue to work and drive on a regular basis will help him take a step forward this season."

"And if he advances, so does the team. This is a year in which you could say that the team starts from scratch and everyone’s input will be fundamental”, he said, emphasising on the team's need to regroup.

The new F112 chassis has been under development at the team's technical office in Munich since middle of last year, and the team is optimistic to debut the new car at the second pre-season test at Barcelona. It will be a welcome departure for Narain compared to 2011, where he had to wait until the opening race in Australia to sample the new car.