The only Indian on the grid for the second Indian Grand Prix recollects his most memorable weekend of the year in his own words. 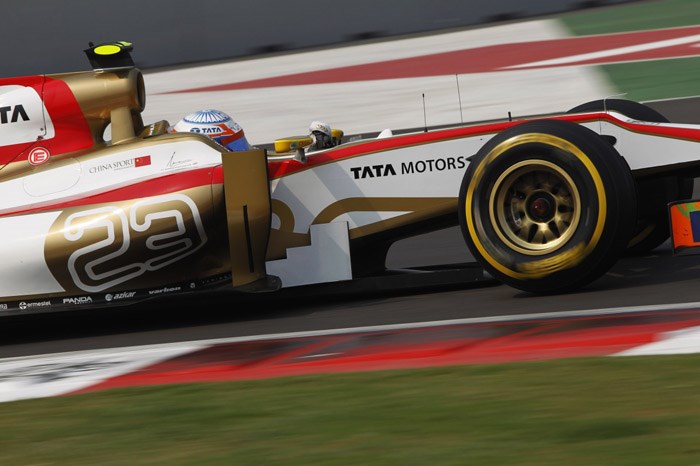 Last year when we hosted our first-ever Formula 1 race, as an Indian familiar with the environment it took some time to come to terms with the feeling. This year, I thought it wouldn’t be any different from other races in some respect, but as I was getting strapped in for first practice at the Buddh circuit, I saw the massive tricolour grandstand in front me and it all came rushing back!

In that moment I realised that I was still not used to being behind an F1 steering wheel without having gone through an immigration check a couple of days before. But guess it is something that'll take maybe a couple of races to get used to.

Mind you, it isn’t simply about the circuit – where I tested the MRF Formula 2000 barely a month ago. The fact that the sterile and meticulously systemised F1 circus plonks itself in the middle of the organised chaos that is our great country is just too incredible to come to terms with.

But everyone loves it here so it is all good, and more so since the organisers have made huge improvements to iron out the rough edges that last year’s rush had dragged along.

As a racing driver though, you quickly try to get rid of all these random thoughts and filter out the emotions once you’re behind the wheel to focus on the job at hand. But the (comparatively) leisurely pace of the out lap allowed me to take in a bit more of the atmosphere and while performing the radio check with my engineer in the pits.

The opening session went about smoothly and although I was aware of how missing the first practice, as the case has been many times this year, had often left me playing catch up for rest of the weekend, I could actually experience the difference. Especially at a track like BIC which evolves massively in the first practice since it isn’t used otherwise, it is absolutely critical to drive on a green track so that you learn which parts of the circuit become faster over the weekend, where do corner speeds go up and how braking points change.

When you come into second practice without doing FP1, you have absolutely no clue about the evolution traits of the circuit and although there is data from the other car, you are unable to take full advantage of the track conditions and make slight tweaks to get that extra edge ahead of qualifying and race.

After the normal radio check and installation laps, we started following our program to establish a base setup with the hard tyre. Tyre supplier Pirelli has nominated its soft and hard compounds so tyre strategy was going to play an important role in the outcome of the race. A significant difference in lap time between the two compounds was expected so choosing the right starting tyre and knowing the degradation patterns of both compounds was critical. In order to determine these, we carried out runs known as race simulation, which gave us an approximate idea of the tyre and fuel usage so we could decide the fastest race strategy.

The second practice kicked off well and we had a slightly more intensive program to run through which included fine tuning the suspension and adjusting the handling to get the most out of the track that was beginning to grip up beautifully.

We stuck to the hard compound for the first half, and elected to switch to qualifying simulations on the soft with about 45 minutes on the clock. But it wasn’t meant to be, as my engineer radioed me to return to the pits almost immediately, after a hydraulic leak was detected. On the in-lap, I was praying for a small issue but once the car was pushed back in the garage, it was clear that it couldn’t be fixed in time for me to go out again and that was it!

It is never pleasant to get out of the car and watch the screen to see others still on track, so I was quite gutted but the car looked in decent shape looking at my teammate’s performance.

After the initial emotional rush of the first day of track action at Buddh, things were slowly falling back to normal on day two. As I said earlier we had some issues in second practice which cost me some track time so I was keen to get on in the final morning practice and qualifying.

The session was quite productive but the track was still changing so much that it made the setup direction difficult to decide at times. The car was working decently well on Friday but since track temperature was lower in morning when compared to FP2, the balance had slightly changed. Eventually we played around with the weight distribution and managed to fine tune it to a decent level but I still thought we could’ve done some more. I ended up a couple of hundredths quicker than my teammate so I knew qualifying would be close.

Come qualifying, we encountered something I had never experienced before – at least at conventional purpose-built circuits. It was incredible to run into so much traffic on a circuit of this length and width. All cars were staying out as tyres were easily good for more than one lap and I paid the price on my fast lap, caught up behind another car.

Anyway, we put on the second set and went out again – the lap was pretty good but I lost maybe two-tenths when I ran wide at turn 14. I think the car had the pace to do a low 1’30 lap (mine was a 1:30.593). My teammate was just a thousandth of a second ahead, which I was told is around two inches on the track at those speeds.

After the build-up which seemed to last forever, it was finally time for the real thing. Race day had arrived at the Buddh International circuit and despite some issues in qualifying I was looking forward to a good finish despite knowing well that matching last year’s 17th place would be a tall order given our potential at the moment.

It was a busy lead up to the race start, apart from the regular team meetings and debriefs there were a obviously lots of guests and so on but it is something you experience only at home. I even managed to have a quick chat with Andy Green – the World Land Speed record holder.

Then before I knew it, it was time for the drivers’ parade and I was really looking forward to it, given my experience from last year. It was overwhelming to see the amount of support in the stands and once again it was something best experienced at your home Grand Prix.

With just over an hour to go, there was no time to waste then and I got into race prep mode. A quick warm-up massage by my physio Balbir Singh was followed by a final look at the strategy with the engineers before jumping into the car. We made our way to the grid without any issues and once again I was greeted by fans cheering from the grandstand.

As the lights went out, I had an average start but decided to stay a little conservative in case something happened at turn one. It is a tight rope to walk – if you’re too conservative, you might end up losing places but it is quite easy to get entangled in an incident at this end of the grid.

But it happened anyway as I had some contact at the first corner and lost a chunk of my front wing. I could see significant damage on the right side and the team actually informed me to come into the pits for a nose change. However, I decided to stay out for a lap to see if it had a significant dent on performance and it turned out be a good decision as the team managed to look at the data and tell me that I could still carry on.

It was a lucky escape, just like the one I had last year after the incident at turn three, but I had already lost quite a bit of ground by then. The damage had affected the balance a little but I decided to press on but there was some more bad news in store on the radio.

The team informed me that the brakes were overheating and I had to coast (lift off the throttle) way before than I normally would before entering a corner, to cool them down. So it was costing us a bunch of lap time and obviously it isn’t the most comforting feeling knowing that your brakes can go belly-up at any time while doing over 300kph – just like it happened a fortnight ago in Korea.

Shortly after, I saw my teammate go off at turn four and hit the barriers which further confirmed the issues we were facing. The problem slowly became less apparent as the fuel burnt off and the car became lighter – reducing the demands on the brakes. We had really good pace towards the end but it was a little too late to make a significant difference to the end result.

Overall, the Indian Grand Prix was a great success, despite being in its second year – the event ran like clockwork and established India as one of the races that the paddock actually looks forward to.