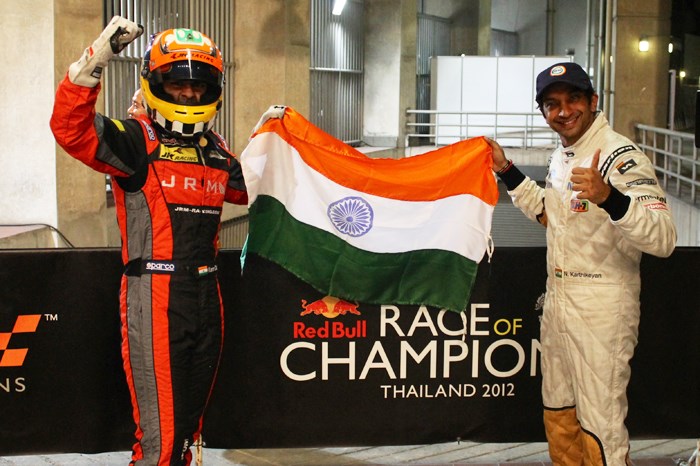 India’s only two Formula One drivers Narain Karthikeyan and Karun Chandhok today won the 2012 Race of Champions (ROC) Asia after beating Japan in the finals of the competition. Team India have qualified to the ROC Nations Cup and will be in the same group as defending Champions Germany comprising of Sebastian Vettel and Michael Schumacher. Team India won the final 2-0 after leading the group stage with 4 wins out of 6 races. Both drivers Narain and Karun won 3 out of their 4 races enroute to victory.

F1 driver Narain Karthikeyan, who drove for HRT this year, was thrilled to win on his first visit to the ROC. He commented, “It is an incredible feeling to be a part of Team India's success in the ROC Asia in only our first visit. It has been really tough with limited track time but at the end of the day we pulled it off. Every race in a different car was a challenge and it feels good to win in identical machinery. Tomorrow is a whole new day and we will give it our best to do our country proud.”

World Endurance Championship driver Karun Chandhok, who drove for HRT in 2010 , Lotus in 2011 and JRM Racing this year, thoroughly enjoyed himself in his first ever ROC. He said, “Am really happy for Narain and me as we did a fantastic job to win ROC Asia. The competition was really strong and we were pushed harder than we thought. It's very special to create history as the first ever ROC Asia Champions against the top Asian racing nations. The atmosphere was amazing and I hope all the fans in India tune in to watch and support us on TV tomorrow.”