British driver Rupert Svendsen-Cook won race one before being punted out of the lead of race two, severely damaging his title prospects. 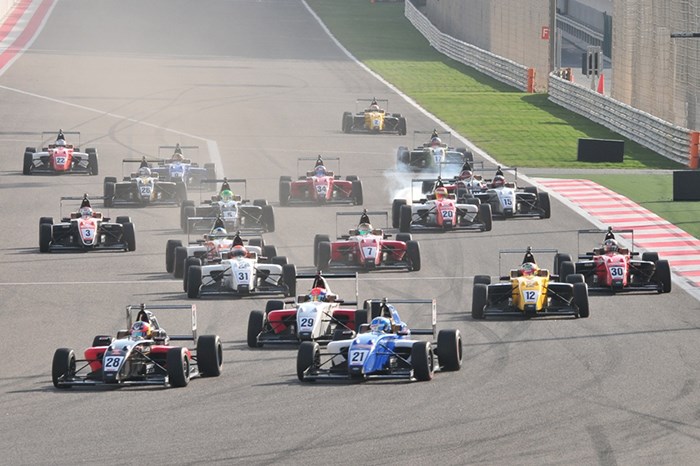 Cypriot driver Tio Ellinas took the championship lead of the MRF Challenge 2013 with a brilliant win and second place at Round 3 in Bahrain. British driver Rupert Svendsen-Cook won race one before being punted out of the lead of race two, severely damaging his title prospects. Tio Ellinas finished in second place while Arthur Pic finished in third place in Race two. Ellinas won race two ahead of Arthur Pic and Sam Dejonghe.

In Race 1, Tio Ellinas started on pole ahead of Rupert Svendsen-Cook and Sam Dejonghe with the top 4 drivers separated by less than three-tenths of a second. The Briton managed to come out on top after a drawn out battle with Ellinas and registered his third win of the season. Ellinas held on to second position with Pic finishing third.

In Race 2, Shinya Michimi started on reverse-grid pole position alongside Sam Dejonghe. Svendsen-Cook, who started in sixth position, made another great start to move up to second in to the first corner behind Michimi.

Pic, who started in fourth position, lost out at the lead and ended up seventh at the end of the first corner. Michimi led with Svendsen-Cook and Ellinas right behind. On lap 5 Svendsen-Cook got past Michimi and went into the lead with Ellinas right behind them as well. On the following lap Michimi tried to re-pass Svendsen-Cook into the second corner but ended up hitting his left rear tyre instead. Svendsen-Cook retired on the spot with Michimi continuing, albeit losing the lead to Ellinas. Michimi was later given a 30-second penalty for his part in the collision, promoting Sam Dejhonge to third place.

Amongst the Indian contingent, Raj Bharath emerged as the fastest driver of day, qualifying eighth and finishing the two races in 12th and 10th positions respectively. Former Force India Academy driver Tarun Reddy also made his debut in the series, qualifying 19th and finishing 15th in race one before being punted out of race two. Vikash Anand qualified 16th and finished 19th in both races amidst several scuffles during the course of both races.