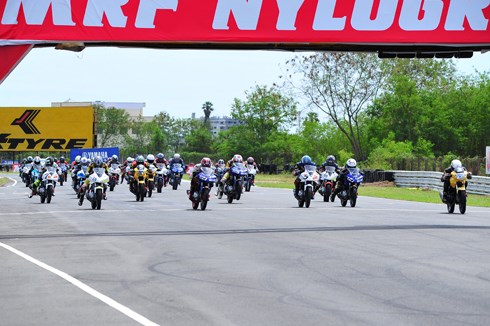 2010 was one of the best seasons of Indian motorcycle racing we had seen in recent times, and made us look forward to the current season which somehow failed to match its predecessor in terms of unpredictability and competition especially in flagship classes. The four-stroke Group B 165cc class was once again relegated to almost a one-team race as TVS factory riders K Jagan, P Karthick and Harry Sylvester staged an intra-team battle for supremacy in the class.

In absence of their last year nemesis Ten10 Racing and Sarath Kumar, who is currently riding in the 125cc class of the MotoGP World championship, there was little to challenge the factory bikes despite Sriskandarajah riding a Group B Yamaha R15, not dissimilar to the machine rode by Sarath last season. The Moto-Rev India rider was unable to extract its potential in qualifying and race one, whereas a mechanical issue kept him out of the foray in race two. R Deepak was the only private rider able to challenge the factory’s might as he crossed the line in second place and managed to split the TVS duo of Jagan and Karthick in race one. However, like Sri- Deepak was also out of reckoning early in race two.

Amongst other classes, the Group D 165cc class witnessed intense action, on and off the track. This year, the class has been split into novice and open categories to ensure fair game for newcomers to the sport. However, the races were run concurrently, encompassing both categories which put 42 riders together on the grid. As expected, the varied levels of riding talent on a packed grid resulted in quite a few spills, keeping the emergency personnel constantly on their toes. The organisers may want to look at scheduling separate races for open and novice category as rightly justified by the humungous grid to limit incidents in future rounds. For sure- the shorter, tighter Kari Motor Speedway at Coimbatore, where the next round is scheduled, will definitely be unable to cope with the combined number of entries on grid considering rider safety.

The Superbike class had the name of K Rajini on the entry list, which meant dominating pole to flag victories were inevitable despite the fact that the Chennai rider chose not to push too hard from get-go. Riding for Moto-Rev this season, Rajini managed to keep clear of the challenging pack consisting of R Deepak, Sumit Lucas and Vivek Pillai. A big crash had put Sumit out of reckoning in race one, whist race two saw Vivek enduring similar fate. Both riders came out unscathed but the same couldn’t be said about their machines!

One make races got plenty of action too, with Yamaha running the R15 in novice and expert classes while Honda added the CBR 250R one-make series to its existing package of Twister, Stunner and CBR 150R races. The grid of 250s did inject some muscle to the proceedings but their pace left everyone wanting for more. The innate touring-focus of the machine was laid bare on the track as its road-friendly demeanour was unable to cope with the extreme performance demands laid down by the racetrack. To give you a perspective, a Group D Yamaha R15 (only lightened by removing panels and exhaust shield) laps the Madras circuit in the range of 2:10-2:12, based on rider skill. Being ridden by championship-winning riders, the CBR 250R was unable to break past the 2:09 range despite enjoying an eight horsepower advantage over the lighter, track-focused Yamaha. Hopefully with some mechanical upgrades and fine-tuning over the season, Honda will be able to extract more speed out of its flagship like it successfully managed to do with the CBF Stunner over the 2009-2010 seasons.