A day after taking his first pole position in 10 months, the Yamaha rider ended a winless run that went back to last August's British GP. 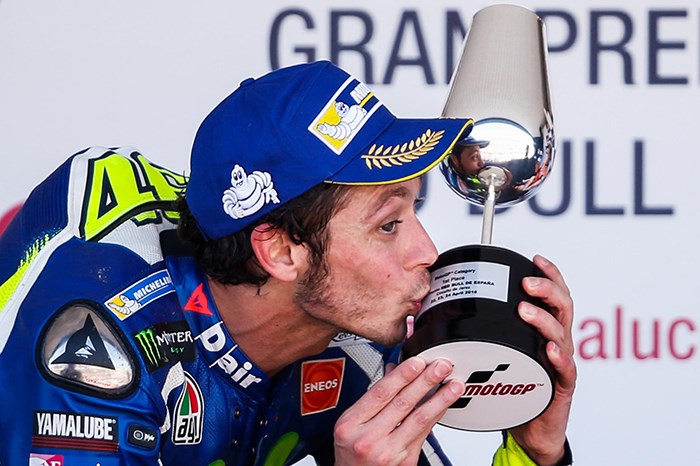 Valentino Rossi claimed the 87th premier class victory of his career to ignite his quest for an eighth MotoGP title, with a masterclass to win the Spanish Grand Prix.

A day after taking his first pole position in 10 months, the Yamaha rider ended a winless run that went back to last August's British Grand Prix at Silverstone.

Rossi kept the lead off the start and while team-mate Jorge Lorenzo challenged him early, he was able to resist that threat and edge away, leading by just under three seconds halfway through the 27-lap Jerez race.

With tyre wear at the forefront of discussions all weekend, Lorenzo then started to make a move.

The gap came down to 2.1 seconds with nine laps to go, but Rossi responded, putting two tenths and then half-a-second back onto it on the following two laps.

With five remaining, the margin was out to more than three seconds for the first time all afternoon, and got up to more than four-and-a-half, before Rossi cruised home on the final lap for an eventual margin of 2.386s.

Rossi's start to the campaign had been mixed, with fourth in Qatar and a fortunate podium in Argentina followed by a fall at Austin a fortnight ago, but he started the European season in the best-possible fashion.

Lorenzo had to withstand pressure from Marc Marquez for the first half of the race, but the Honda rider fell away over the remainder to finish nearly 5s behind the world champion.

With the results, Marquez keeps the championship lead on 82 points, 17 ahead of Lorenzo and 24 clear or Rossi.

Dani Pedrosa ran ahead of his team-mate briefly early in the race and eventually finished fourth, ahead of Suzuki pair Aleix Espargaro and Maverick Vinales.

Andrea Iannone salvaged seventh from 11th on the grid, ending a torrid weekend as Ducati struggled with power delivery.

For the third race in a row, his team-mate Andrea Dovizioso was forced out through no fault of his own.

Dovizioso opted to race on the softer front tyre and ran as high as fifth, but retired from seventh on lap 10 with a technical problem at the rear end of his Ducati.

Pol Espargaro was the leading satellite rider in eighth, ahead of Eugene Laverty and Hector Barbera.