The pair spent the bulk of the race nose-to-tail and while Rossi emerged with his second victory of the season. 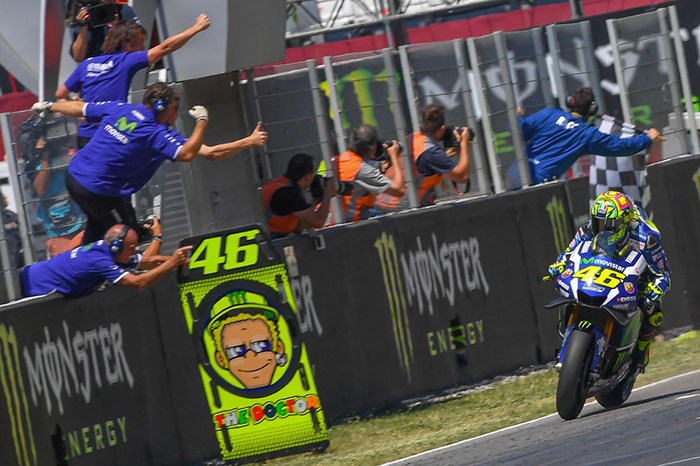 The pair spent the bulk of the race nose-to-tail and while Rossi emerged with his second victory of the season, Marquez now leads the championship after Jorge Lorenzo had a disastrous day.

Lorenzo got the jump off the line, but his race quickly unravelled.

Rossi dropped to eighth at start, but picked his way through and took the lead from Lorenzo down the inside at Turn 1 at the start of lap six.

Marquez moved past at Turn 5 on the same lap, while Dani Pedrosa and Maverick Vinales also moved past the struggling world champion over the following laps.

With 10 laps remaining, Lorenzo was 10 seconds behind Rossi, with Andrea Iannone closing on him quickly.

There was worse to come. Iannone overshot the run into Turn 10 and his Ducati tagged the rear of Lorenzo's Yamaha, taking both riders out of the race.

That put the focus back on the battle at the front between Rossi and Marquez.

The gap fluctuated between three and six tenths of a second, with Rossi unable to shake the Honda rider and leading by 0.248s with five laps remaining.

Marquez then made his move.

He snuck ahead briefly at Turn 10 later that lap, but Rossi recovered mid-corner and emerged with the lead.

Marquez breezed past the Yamaha down the front straight with four laps to go, but Rossi was able to hold on under braking into Turn 1.

A lap later, Marquez made a move stick, but Rossi was able to stay close enough to reclaim the lead at the same place on the penultimate tour.

Rossi edged away slightly over the course of the lap, before a mistake by Marquez at Turn 7 gave the Italian breathing space for the final lap.

His second win of the campaign is his first at Barcelona since 2009.

Rossi and Marquez's frosty relationship did not prevent them from shaking hands in parc ferme post-race.

Marquez now leads the championship with 125 points, 10 clear of Lorenzo, with Rossi a further 12 behind.

Pedrosa turned his first front-row starting position of the year into third place, with Vinales eventually finishing a distant fourth, the pair having fought it out in a lively battle before they caught and passed Lorenzo.

Alvaro Bautista was a late mover for Aprilia, picking up several places in the closing laps to finish eighth.

The last man he passed was Danilo Petrucci, while Hector Barbera fell back from fourth on the grid to finish 10th.

After the race, Barbera was demoted one place for an illegal move at Turn 13 on the final lap, elevating Jack Miller to 10th, the Marc VDS Honda rider's best race result in MotoGP.