Pedrosa was well clear of Cal Crutchlow, second aboard the Tech 3 Yamaha despite riding with a shin fracture from his practice crash 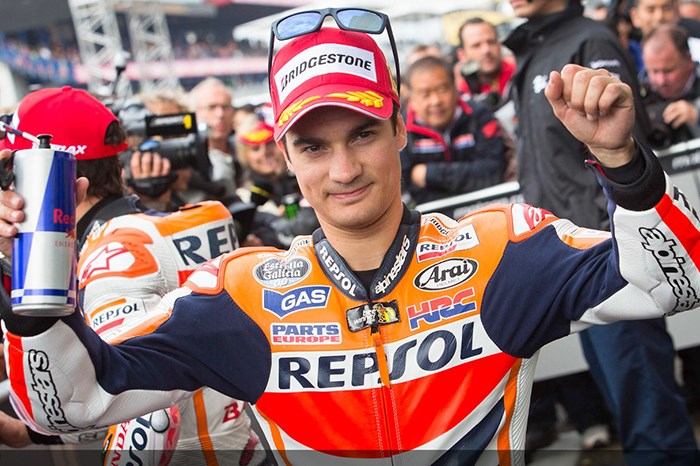 Dani Pedrosa dominated an eventful French Grand Prix to take over the top spot in the MotoGP championship standings.

Pedrosa was well clear of Cal Crutchlow, second aboard the Tech 3 Yamaha despite riding with a shin fracture from his practice crash.

The win moved Pedrosa six points clear of team-mate Marc Marquez, who recovered to third on the second Honda after a poor start, and 17 ahead of Jorge Lorenzo, whose Yamaha was only seventh.

Andrea Dovizioso's Ducati seized the early initiative on a tentative first lap during which Marquez dropped to the rear of the top 10.

Crutchlow dispatched Nicky Hayden and then Stefan Bradl in successive laps to move into fifth, before hauling his satellite Yamaha on to the tail of the two factory bikes.

Pedrosa passed Dovizioso at Turn 6 but the Italian tucked underneath him as the Honda ran wide, though Pedrosa made the move stick shortly after.

He started to extend his lead, and was almost two seconds clear when a mistake at Turn 4 dropped him back behind Dovizioso once again.

He reclaimed the lead at Turn 6 on lap 11 and three laps later had to repeat the move yet again, at the same corner, after another mistake had allowed Dovizioso back in front.

Lorenzo was struggling at this point and dropped to the back of the six-bike train before slipping to eighth by the end of the race. Crutchlow moved into third on lap 14, powering past Rossi on the exit of the Dunlop chicane.

As the race began to calm down, Rossi crashed on lap 18, dropping his bike on the entry to the chicane as he defended from Hayden, rejoining in 12th.

A mistake from Dovizioso five laps from the finish allowed Crutchlow to pass the Ducati on the run down to Turn 4, with Marquez, who had caught and passed Hayden, demoting Dovizioso to third on the penultimate lap.

The two Ducatis therefore came home in fourth and fifth, while the various incidents had allowed Alvaro Bautista to creep almost unnoticed into sixth, keeping Lorenzo at arm's length after passing him during the Spaniard's early drop down the order.

Aleix Espargaro was the top CRT rider in 13th, just behind the recovering Rossi.