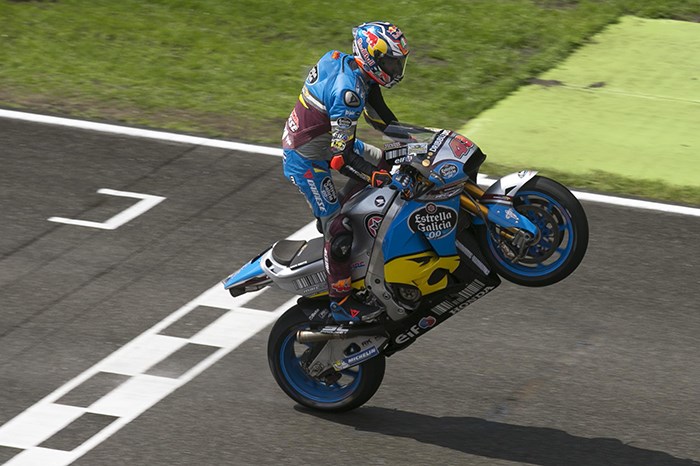 The start of Miller's second season in MotoGP has been hampered by injury and he entered the weekend with a best race result of 10th.

The start of Miller's second season in MotoGP has been hampered by injury and he entered the weekend with a best race result of 10th.

He changed all of that in the second half of the race, following a 30-minute stoppage, becoming MotoGP's first new winner since Marquez in 2013, and the first Australian to win a race since Casey Stoner at Phillip Island in '12.

It is also the first time a satellite team has won a race since October 2006, when Toni Elias was victorious for Gresini at Estoril.

Marquez finished second to reassert his championship lead, as Jorge Lorenzo struggled on his way to 10th of the 13 runners at the finish, with Valentino Rossi on a long list of riders to have crashed out.

Rain fell in the hour before the race, and a dry line started to emerge as the laps ticked by, to the point that second bikes were being warmed up in pitlane, anticipating swaps to get off wet tyres.

At that time, Yonny Hernandez led the way by nearly four seconds, but when the rain returned, Andrea Dovizioso cut into that margin before the Colombian crashed at Turn 1 on lap 11.

Then the heavens really opened and the race was red flagged on the 15th of the planned 26 laps, due to concerns over standing water.

It was shown just as Danilo Petrucci had taken the lead from Dovizioso, with Valentino Rossi, Scott Redding, Marquez and Dani Pedrosa forming a seven-rider fight for first place.

The new grid was set based on the order at the end of lap 14, before Petrucci had made his move.

When the rain subsided and the track dried sufficiently, the race was restarted as a 12-lap affair half an hour later.

The three laps after the restart were chaotic as riders struggled with front tyre grip and temperatures.

Rossi claimed the lead, then Dovizioso crashed at Turn 12.

Then Rossi's title hopes suffered a major blow when he also fell, unable to get his Yamaha fired up again to rejoin the race.

That handed the advantage to Marquez, who finished the opening half of the race fifth, and got the holeshot off the line at the restart, but ran wide at the first corner and conceded the lead to Dovizioso and Rossi.

When the Italians exited the race, Marquez's time at the front was shortlived.

Miller, who rose from 18th to eighth in the first half and then to fourth at the restart, moved past and into the lead on the fifth of the 12 laps.

The 2014 Moto3 runner-up, Miller seized his moment and edged away from Marquez, crossing the line to take his maiden MotoGP victory by nearly two seconds.

Second place gives Marquez a 24-point lead in the championship over Lorenzo, with Rossi now 42 points behind.

Lorenzo never looked comfortable in the wet conditions, finishing the first leg of the race 50 seconds behind Dovizioso.

The last of the riders who kept it upright for the duration, Lorenzo was ultimately 10th, 27.6s behind Miller at the end.

The final podium position went to Redding, who forced his way past Pol Espargaro at Turn 1 with two laps to go, denying the Tech3 Yamaha rider his maiden visit to the rostrum.

From last on the grid, Andrea Iannone made his way up to fifth in the first half of the race, but fell just before the restart.

Crucially, he was able to get back on his Ducati, and from 17th on the grid made his way back through the order to finish fifth, ahead of Hector Barbera, Eugene Laverty and Aprilia's Stefan Bradl.

Like Lorenzo, Maverick Vinales was nowhere in the wet conditions, the Suzuki rider finishing ninth.