Yamaha's Jorge Lorenzo ended up second, trailing by 0.2 seconds at first, before closing to within 0.030s with his penultimate lap. 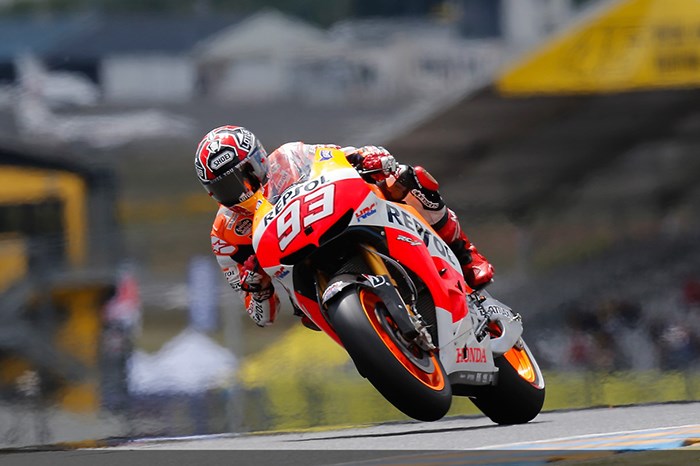 Marc Marquez claimed his second MotoGP pole in four starts as he converted his practice pace to the qualifying top spot at Le Mans.

Riding his spare Honda after crashing at the chicane late in the pre-qualifying practice session, Marquez put in an 1m33.187s in Q2 to take provisional pole.

Jorge Lorenzo trailed that by 0.2 seconds at first, before closing to within 0.030s with his penultimate lap.

Marquez could not improve on his last run, and Lorenzo looked like he had a chance of deposing his Jerez sparring partner as he began a final lap 20s before the flag and set new benchmark early sectors.

But the lap faded in the second half and the Yamaha man had to settle for second.

Marquez's team-mate Dani Pedrosa was in the pole fight until crashing at the Dunlop chicane halfway through Q2.

Although he hurried back for his spare Honda, Pedrosa slipped back to sixth.

Yamaha's second works bike was also further down the order. Valentino Rossi's Friday optimism was dashed in qualifying as he struggled to eighth, 0.8s off the pace.

With Pedrosa and Rossi in trouble, it was Andrea Dovizioso who claimed the final front row spot in an impressive performance for Ducati.

Cal Crutchlow had a heavy crash at La Chappelle in fourth practice, causing a red flag that delayed the rest of practice and qualifying. Despite this, he came within 0.006s of beating Dovizioso to third.

De Puniet had upstaged his team-mate in Q1 with a late flying lap at home, but Espargaro got back on top in Q2 - although neither could claim any further prototype scalps.