The Spaniard belied his inexperience of the Californian track, leading three of the four practice sessions and missing out on pole due to a crash. 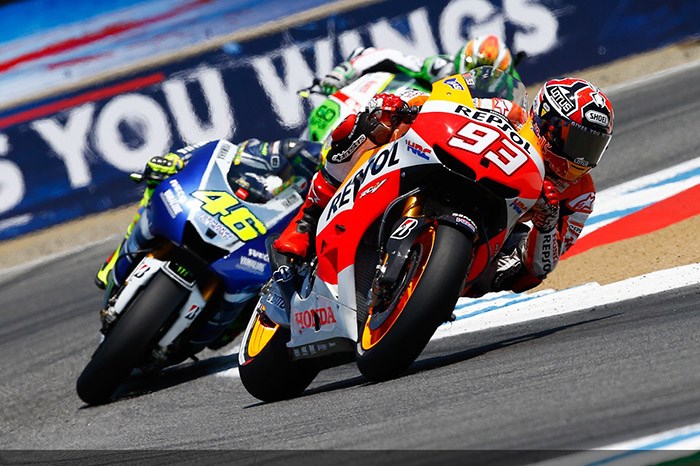 Marc Marquez extended his MotoGP championship lead as he claimed a second consecutive race win on his Laguna Seca debut.

The Spaniard belied his inexperience of the Californian track all weekend, leading three of the four practice sessions and only missing out on pole due to a crash.

It was Stefan Bradl who grabbed pole and he held his lead for over half the race.

Marquez made a slightly slow start and needed to first fight back past Valentino Rossi, achieving that with a scrabbling Corkscrew pass in which both took to the dirt.

Bradl was 1.6s clear after that tussle, but Marquez's works Honda was soon shadowing the LCR example. A long chase ensued, before Marquez eventually slipped ahead into the final corner then pulled away.

Bradl was still able to claim his first MotoGP podium in a comfortable second place, two seconds behind Marquez, who is now 16 points clear in the championship.

Rossi had to settle for third on the top Yamaha, fending off race-long pressure from Alvaro Bautista - who was just 0.059s away from denying Rossi a podium when they charged over the line.

Marquez's title rivals Dani Pedrosa and Jorge Lorenzo had gentle races to fifth and sixth as they nursed their injuries.

Lorenzo had jumped to fourth early on before fading, although he still had sufficient reserves to stay clear of a muted Cal Crutchlow.