Reigning champion Marquez had won from pole at the track every year since his 125cc title-winning campaign in 2010. 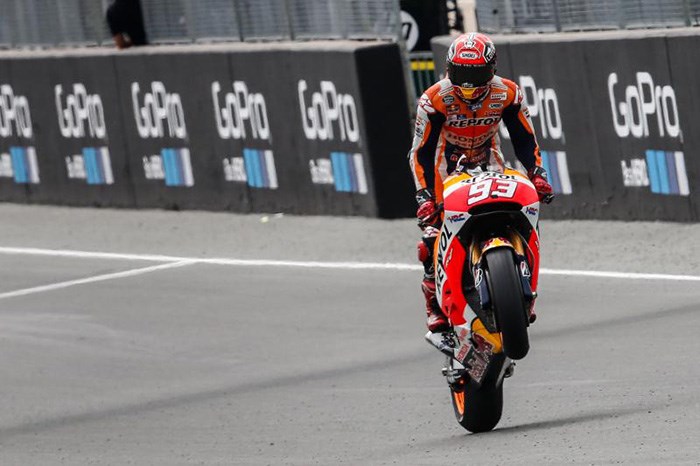 Marc Marquez finally took his second win of the 2015 MotoGP season by dominating the German Grand Prix at the Sachsenring for Honda.

Reigning champion Marquez had won from pole at the track every year since his 125cc title-winning campaign in 2010, and that streak looked safe when he topped every practice session and claimed pole this weekend.

It wasn't totally straightforward for Marquez, who was jumped by Honda team-mate Dani Pedrosa at the lights and ended up in third as Jorge Lorenzo swept around the outside of them both on his Yamaha.

Honda made a unique choice of standard hard front Bridgestones on a day when everyone else chose the softer 'Sachsenring special' asymmetric front, potentially setting up a battle of tyre strategies.

In the event, the Hondas were simply faster in the race as they had been for much of the weekend.

Marquez quickly demoted Pedrosa to third and by the end of lap five he was through on Lorenzo into the lead.

From there Marquez quickly escaped, leaving the Yamahas to fight over second.

It took repeated attempts before Rossi was able to overtake Lorenzo, and even once clear he did not have the pace to keep up with Marquez.

Instead he had to focus on Pedrosa, who also passed Lorenzo and then made it a Honda one-two by passing Rossi at half-distance.

Rossi clung on behind Pedrosa until the final laps before settling for third, which still increased his championship lead to 13 points as Lorenzo drifted away in fourth.

Andrea Iannone completed the top five after a lonely race on the best of the Ducatis.

His team-mate Andrea Dovizioso crashed out of eighth, while underdog qualifying star Yonny Hernandez tumbled back from fifth to 12th on the Pramac Ducati.

Britons Bradley Smith and Cal Crutchlow were sixth and seventh.

The biggest dice of the race was over eighth place, a battle involving six bikes in the middle stages.

Pol Espargaro eventually won it ahead of Danilo Petrucci.

The Suzukis were left squabbling over 10th place, a battle Aleix Espargaro by just 0.021 seconds over Maverick Vinales at the line.