The pair stayed absolutely glued together for the whole race; the gap between them was always between 0.2 and 0.3 seconds. 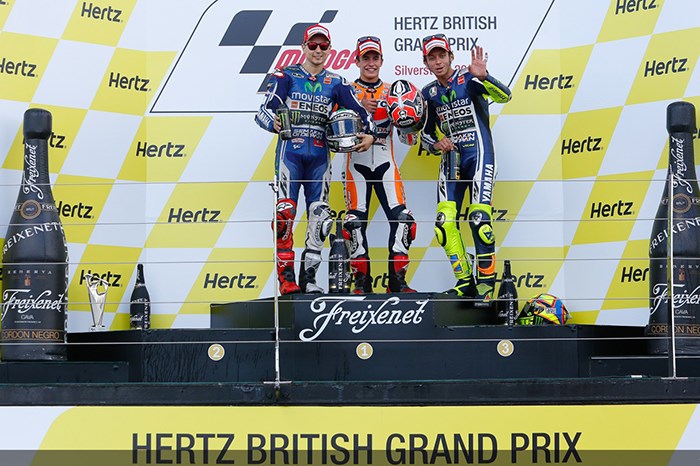 Lorenzo - who had won three of the four Silverstone MotoGP races so far - thrust his Yamaha down the inside at Copse on the first lap to take the lead from Marquez's Honda.

The pair stayed absolutely glued together for the whole race, the gap between them always between 0.2 and 0.3 seconds.

Marquez made his first move with seven of the 20 laps left, slicing down the inside of Lorenzo at Stowe.

But he couldn't get away, and when he ran wide at the same spot two laps later, Lorenzo was back through.

Marquez had to go back on the attack, and with three laps to go he squeezed alongside at Village.

Somehow Lorenzo held on around the outside as they made light contact, but Marquez would not be denied and hurled his Honda through into The Loop.

Valentino Rossi completed the podium on the second Yamaha after a superb race-long scrap with Dani Pedrosa's Honda and Andrea Dovizioso's Ducati.

Pedrosa made it up to third at half-distance and looked like pulling clear, but he could not shake off his rivals and briefly fell to fifth again before repassing Dovizioso and making a final unsuccessful bid to unseat Rossi.

Bradley Smith was looking good for sixth early on, only for a wheel problem to cost him two laps in the pits.

His Tech 3 Yamaha team-mate Pol Espargaro ended up taking the spot after a dice with Andrea Iannone and Alvaro Bautista, with the latter crashing out at the end.

Aleix Espargaro ran as high as third on the opening lap, but gradually faded back to ninth at the finish.

Fellow Britons Leon Camier and Michael Laverty finished their home race just outside the points in 16th and 17th respectively.