Dani Pedrosa completed the podium, while Bradl, Iannone, Smith and Bautista all crashed out while running inside the top five. 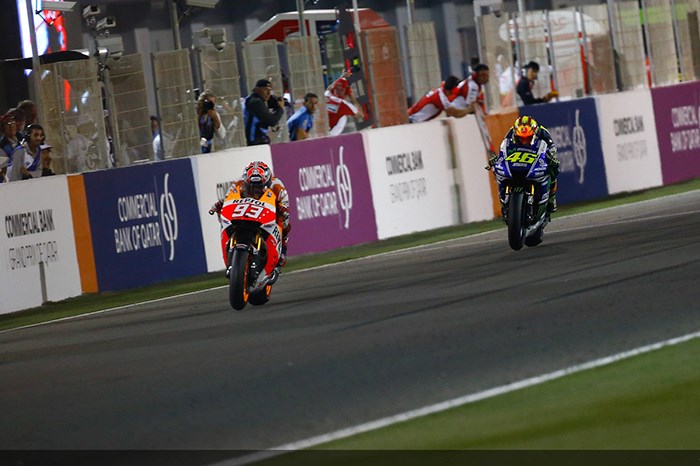 Dani Pedrosa completed the podium, while Stefan Bradl, Andrea Iannone, Bradley Smith and Alvaro Bautista all crashed out while running inside the top five.

The drama started on the first lap, as Lorenzo leapt from fifth to the lead before Turn 1, and then set a blistering pace as he attempted to establish an early gap.

Before one lap had been completed however his race was wrecked, as he lost the front at Turn 15 and crashed heavily into the gravel.

Bradley Smith inherited the lead, only to suffer his own wobble which allowed Stefan Bradl and polesitter Marc Marquez to slip by.

The order swung once more when Iannone fell from fourth and then Bradl dropped his LCR Honda at Turn 6, allowing Marquez to hit the front.

Rossi, though, picked off the Spaniard at Turn 15, in what was just the first of a sequence of attacks and counters between the pair that lasted all the way until the flag.

After several aborted attempts, Marquez eventually reclaimed the lead at three-quarter distance, but he was unable to break Rossi and came under increasing pressure from the Italian.

With two laps to go that climaxed as Rossi hit the front once more at Turn 4.

Marquez responded in typically aggressive fashion, but was repassed - and then fought back once more - over the final turns.

Rossi remained locked onto Marquez's wheel throughout the final lap, but was unable to mount a serious attack and came home second, just 0.259s splitting the pair at the flag.

Marquez's victory, which comes just six weeks after he broke his leg, gives him an early points lead in his 2014 title defence.

Pedrosa secured third, but only after another dramatic fall when Bautista - who made a poor start but was otherwise a permanent fixture at the front - fell at Turn 2 two laps from the finish.

Smith, running a secure fifth, had slipped up at the same turn just three laps previously.

The attrition meant Aleix Espargaro was able to come through to finish fourth ahead of Andrea Dovizioso and Cal Crutchlow.

The duo, both riding Honda's Open machine, were separated by just 0.035s at the finish.