From pole, Lorenzo was never really challenged, despite an early push from Ducati's Andrea Dovizioso. 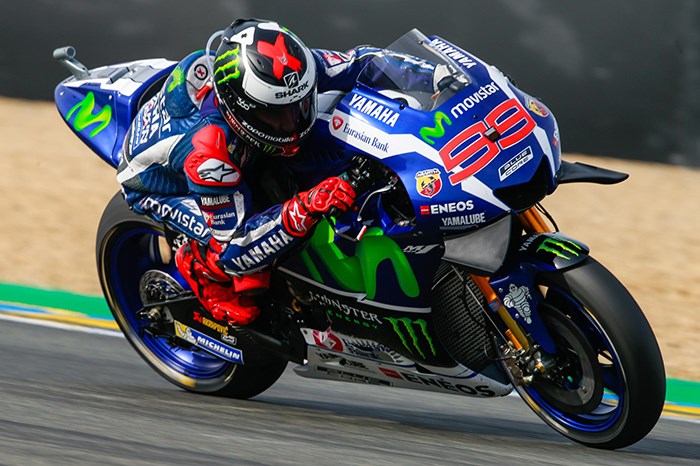 Yamaha's Jorge Lorezno stayed clear of the trouble in a chaotic French Grand Prix to take victory and the MotoGP points lead at Le Mans.

From pole, Lorenzo was never really challenged, despite an early push from Ducati's Andrea Dovizioso - who vaulted from fifth to second off the line - and then Andrea Iannone.

However, when Iannone started a chain of crashes for leading riders on lap eight and Dovizioso's pace dropped, Lorenzo pounced out front to pull away.

Valentino Rossi finished as his closest challenger, from seventh on the grid, but other than Iannone's demise he wasn't directly a beneficiary of the chaos.

Rossi fought clear of early traffic to hunt down Dovizioso and Marc Marquez, then second and third, and moved past the pair with clean moves on consecutive laps.

Two laps after Rossi had moved into second place, Dovizioso and Marquez fell behind him at Turn 7, with identical but completely separate crashes.

Dovizioso joined his team-mate Iannone on the sidelines, while Marquez rejoined and brought his damaged Honda home in 13th, one lap down, but claiming three valuable championship points.

It means Lorenzo moves to 90 points and the lead of the championship, five ahead of Marquez and 12 clear of Rossi.

Dani Pedrosa was another big mover coming from 11th place on the grid after a qualifying fall, and while his run to fourth was aided by crashes ahead, he did move past Pol Espargaro and Aleix Espargaro, who finished fifth and sixth.

On his return from injury, Pramac Ducati's Danilo Petrucci was seventh, ahead of Hector Barbera and Aprilia pair Alvaro Bautista and Stefan Bradl.

A total of eight riders failed to finish, with a suspected engine problem for Scott Redding the only one not due to a crash.