Rossi had only qualified sixth but jumped to fourth on the first lap. 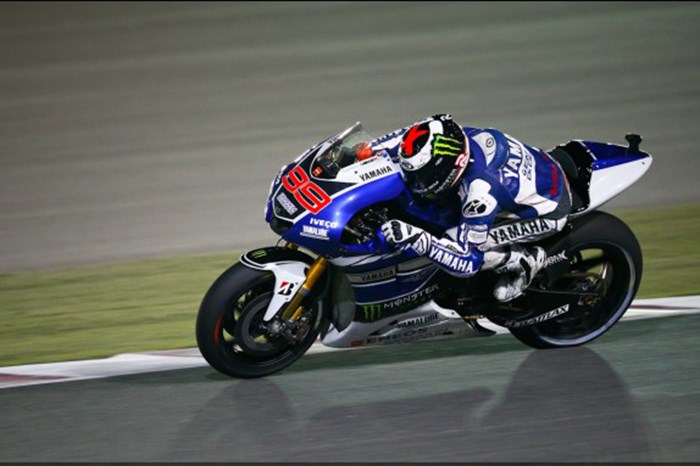 Jorge Lorenzo dominated the 2013 MotoGP season-opener in Qatar as his Yamaha team-mate Valentino Rossi battled through to beat Marc Marquez to second.

The sensational podium tussle featured Rossi fighting back from an early mistake that dropped him to seventh, ultimately beating the Hondas of Marquez and Dani Pedrosa to the runner-up spot.

Lorenzo held his pole advantage into the first corner and immediately disappeared up the road. An opening-lap lead of 0.6 seconds soon became two seconds and 5.9s by the end.

While the world champion was a class apart, there was no shortage of action in the battle to be second best.

Having qualified in the middle of the front row, Cal Crutchlow was elbowed back to fifth in the opening corners, as Pedrosa took second and Andrea Dovizioso's Ducati and Rossi surged to third and fourth.

Not keen to be behind ex-employer Ducati for long, Rossi twice dived past Dovizioso only to run wide.

While the first such error was mild, the second sent him over the Turn 1 run-off and down to seventh at the start of lap two.

Marquez had dropped to eighth on the opening lap but quickly sliced back up the order to get between Pedrosa and the recovering Crutchlow in their very close battle for second.

Rossi was stuck behind Stefan Bradl's LCR Honda until lap eight, by which time the works Hondas and Crutchlow were four seconds clear. Bradl crashed out soon after.

Though the podium battle appeared out of reach, Rossi was not to be denied.

By the time Marquez got ahead of Pedrosa for second with five laps left, Rossi was on the tail of this group.

He squeezed between Crutchlow and the pit wall for fourth in a cloud of dust, with the Briton then skittering over the run-off after sliding onto the Turn 1 kerbs.

Next on Rossi's list were the Hondas, both of which he passed within half a lap.

But the battle was not over. Marquez stayed with Rossi as Pedrosa fell away, and thrust back ahead into Turn 1 with a bold move two laps from home.

Rossi was soon in front again, but Marquez never gave up, staying on the seven-time champion's tail to the flag as he claimed a podium on his MotoGP debut.

Behind Pedrosa and Crutchlow, Alvaro Bautista broke away from the Ducatis of Dovizioso and Nicky Hayden to take sixth.