MotoGP: Lorenzo on pole at Jerez

Dani Pedrosa will start second, 0.247 seconds away from Lorenzo, having been one of the men to fall in the dramatic closing minutes. 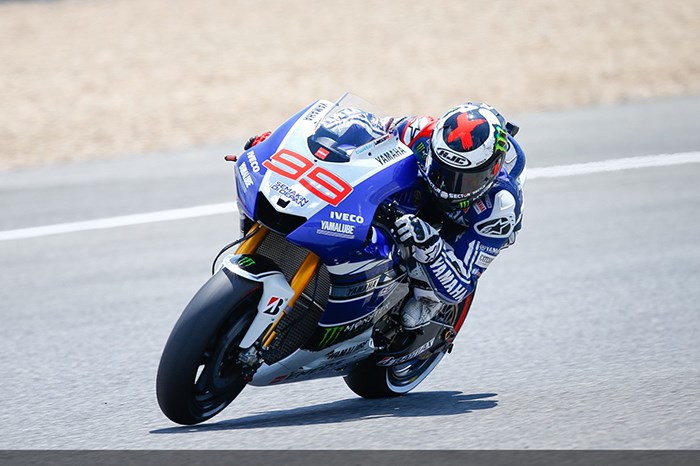 Jorge Lorenzo held on for a home MotoGP pole position at Jerez as many of his main rivals crashed.

Dani Pedrosa will start second, 0.247 seconds away from Lorenzo, having been one of the men to fall in the dramatic closing minutes.

Valentino Rossi and Cal Crutchlow also crashed. Like Pedrosa, both were unhurt.

Marc Marquez had got his crash out of the way in the practice four session just before qualifying. He stayed upright in the pole shootout and completes the front row.

Yamaha rider Lorenzo was on top for the majority of Q2, improving to a 1m38.673s to seal the place.

Pedrosa's high-speed fall came as he was trying to respond, and was followed just moments later by a similar incident for Rossi. Their respective Honda and Yamaha bikes sustained hefty damage, but the riders were unscathed.

Marquez's incident had been far less spectacular - the Austin winner sliding off in a low-speed low-side in final practice.

Within just four minutes of his violent fall early in Q2, Crutchlow was back in the pits and jumping on his spare Tech 3 Yamaha.

Despite a gallant effort in gravel-covered leathers, the Briton could not improve and remained fourth, ahead of Rossi and Alvaro Bautista.

Nicky Hayden was the quickest of the Ducatis in seventh.

Hector Barbera's stunning practice form continued as the Avintia man became the only CRT rider to reach Q2, doing so at the expense of Ducati guest Michele Pirro.

Barbera then became yet another crasher in Q2, yet still beat Andrea Iannone and Bradley Smith to 10th on the grid.

Iannone had mitigating circumstances, as he had a nasty fall in Q1, sustaining severe leg cuts.

Completing the incident list, both Lukas Pesek and Colin Edwards crashed their bikes during the opening segment.