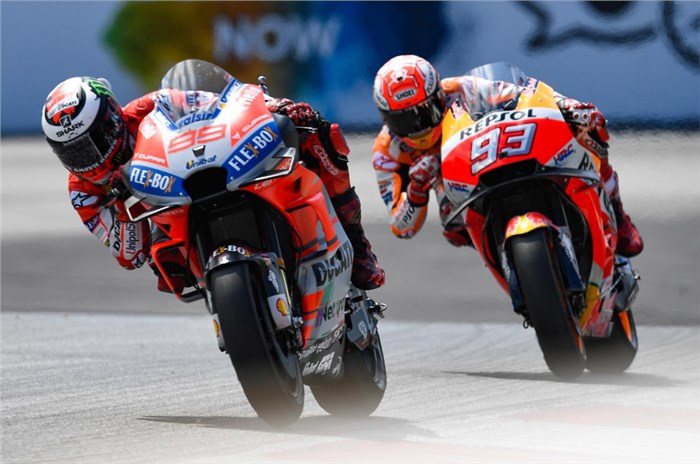 Jorge Lorenzo took a thrilling victory at the Red Bull Ring after engaging in a fierce dogfight with his teammate-to-be for next year, Marc Marquez. Andrea Dovizioso kept pace with the pair in the early stages of the race but eventually fell back to a solitary third place.

Having qualified in pole position by just two-thousandths of a second, Marc Marquez seemed to be the only rider capable of taking the battle to the two factory Ducati riders. At the start, it was Dovizioso who got off the line well and led the pack out of turn one. Marquez fought back almost immediately, with a lunge up the inside at turn three, but forced both riders wide, and allowed Lorenzo to take the lead.

A lap later, Marquez regrouped and got past Lorenzo at turn three, and put his head down straight away. Riding with a hard rear tyre on his Honda, the Spaniard pushed hard to try and break away, and for a moment, it looked like he would. However, just as the gap was about to surpass the one-second mark, the Ducatis began to close the gap.

At this stage of the race, it was Dovizioso who seemed to be the stronger of the two, with the Italian looking menacing behind his teammate. However, he was unable to pass, and the pair rode held position as they closed in on Marquez at the front.

Lorenzo made his first pass at turn one, diving in the braking zone and blocking the inside line. This, in turn, forced Marquez to the outside edge of the track and left Dovizioso with nowhere to go. The Italian was forced to pick up his bike and run wide at turn one, losing nearly 1.5sec in the process. From that point onwards, it was a head-to-head clash between Marquez and Lorenzo.

Once again, Marquez fought back almost immediately, regaining the lead at turn three. It wouldn’t last for long, though, as Lorenzo fired back into first place at turn nine on the same lap. At this point, the duo pulled away from Dovizioso, while choosing not to battle amongst themselves.

With three laps to go, Lorenzo ran wide at turn three, allowing Marquez through once more. Turn nine was an area of the circuit where Lorenzo was clearly stronger, and he once again made a hard but fair lunge up the inside, leaving Marquez with no option but to relinquish.

Marquez made one final overtaking attempt at turn three on the penultimate lap, but Lorenzo was able to motor past him down the home straight and rode a flawless final lap to take victory by just over a tenth of a second.

Behind the battle for the race win, Dovizioso held on to third place, ahead of top independent finishers Cal Crutchlow and Danilo Petrucci. Valentino Rossi once again pulled the rabbit out of the hat on Sunday, recovering from 14th on the grid to finish in the top six, less than a second behind Petrucci. Dani Pedrosa brought the other Repsol Honda home in seventh place, ahead of top Suzuki Alex Rins. Johann Zarco and Alvaro Bautista rounded out the top 10.

The series now takes a weekend off, before returning to action at Silverstone in two weeks’ time. Austria will have been a bittersweet result for Marquez – despite not being able to win, he was able to extend his championship lead over Valentino Rossi to a sizeable 59 points. The Spaniard will be looking to manage that lead all the way to the end of the season.