The Spaniard did not put a wheel wrong during the French Grand Prix and kept team-mate Rossi at arm's length. 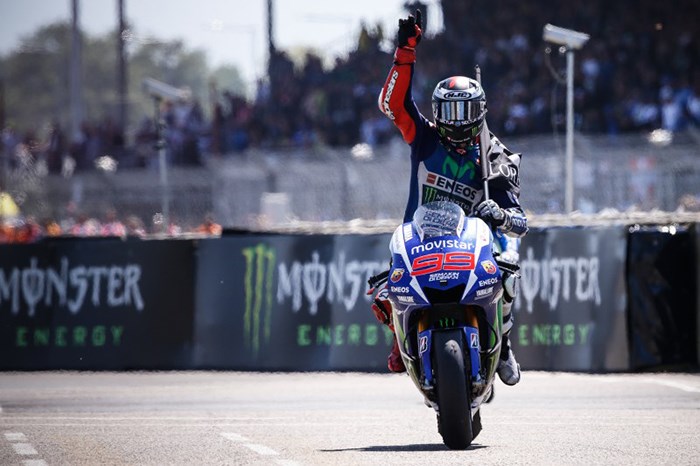 Jorge Lorenzo made it back-to-back MotoGP wins with a commanding ride to victory, leading Valentino Rossi home in a Yamaha one-two at Le Mans.

The Spaniard did not put a wheel wrong during the French Grand Prix and kept team-mate Rossi at arm's length in the final half of the race to earn a second win of the season.

Lorenzo made a solid start from third on the grid to follow Ducati's Andrea Dovizioso past poleman Marc Marquez, and moved to the front when Marquez ran too deep into the Dunlop chicane.

The Honda rider briefly retook the lead but dropped to fourth as he regained control of his bike, delaying Dovizioso in the process and handing Lorenzo the initiative.

Lorenzo needed no second invitation and immediately edged clear of Dovizioso, the second Ducati of Andrea Iannone and Marquez.

Honda's poor start to the race got worse at the start of the second lap as the returning Dani Pedrosa crashed while running seventh. The injured Spaniard resumed, and ran to the end, finishing 18th.

Things got worse for Honda when Rossi made short work of Marquez, who then ran wide to drop behind Bradley Smith and Cal Crutchlow.

Dovizioso briefly caught and pressured Lorenzo but when Rossi dived by Iannone with a third of the race run the leader bolted, turning the wick up at the perfect time as Rossi caught Dovizioso and made short work of the leading Ducati.

By the time the Yamahas ran in tandem Lorenzo had a 1.8s lead, one that Rossi never looked in danger of overturning as the championship leader settled for second.

Dovizioso completed the podium in third ahead of Marquez, who recovered from his poor start to beat Iannone and Smith in a tight battle late on.

Crutchlow started fourth but fell to seventh at the start, and was the first victim of Marquez's recovery ride before crashing his LCR Honda shortly after.