Championship leader Marc Marquez blew his chances with a crash. 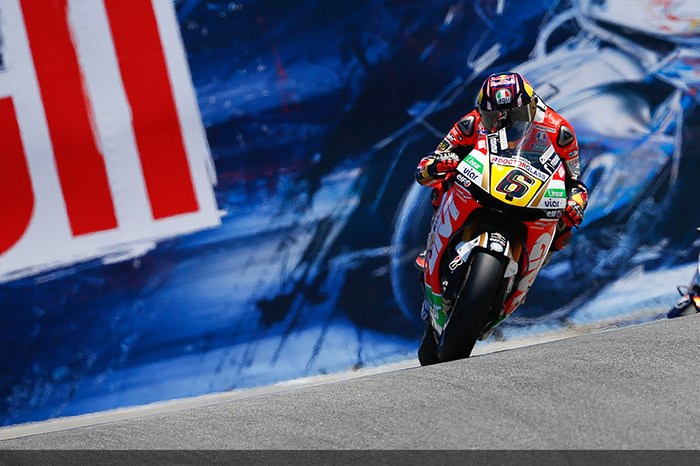 Stefan Bradl claimed a shock MotoGP pole at Laguna Seca after Marc Marquez blew his chances with a crash.

Marquez had looked set to dominate qualifying, having been quickest in practicesessions two, three and four, and with main rivals Jorge Lorenzo and Dani Pedrosa nursing injuries.

Championship leader Marquez duly commenced Q2 with two laps half a second clear of the pack.

But while trying to improve further, he slid into a low-side crash at Turn 6.

Until the final minute, it appeared that Marquez's 1m21.193s might still hold for pole.

That was until Bradl launched his LCR Honda to the top with a lap 0.017 seconds faster than the man he beat to the 2011 Moto2 title, giving the German his first ever MotoGP pole.

It was an all-Honda front row, with Alvaro Bautista's thrid place for Gresini almost as big a surprise as Bradl's pole given the Spaniard's recent difficulties.

Valentino Rossi was the fastest Yamaha in fourth.

Cal Crutchlow had a troubled session, crashing in practice four just before qualifying then losing half of Q2 to a sensor problem on his Tech 3 Yamaha.

The Briton salvaged fifth with one of the few flying laps he managed.

Lorenzo challenged for a front row spot despite his injuries, but ultimately had to settle for sixth.

That was just one place ahead of Pedrosa, who made short work of getting through Q1 to the pole shootout having sat out practice one and three to avoid straining his damaged shoulder.

The latter's Aspar team-mate Randy de Puniet reached Q2 but crashed at Turn 3 before he could set a time.

Only 23 bikes will contest the race as American wildcard Blake Young and his Attack team had to withdraw following Young's destructive crash on Friday afternoon.