Alex Marquez finished 2nd, while Joan Mir moved into the championship lead after a 3rd-place result. 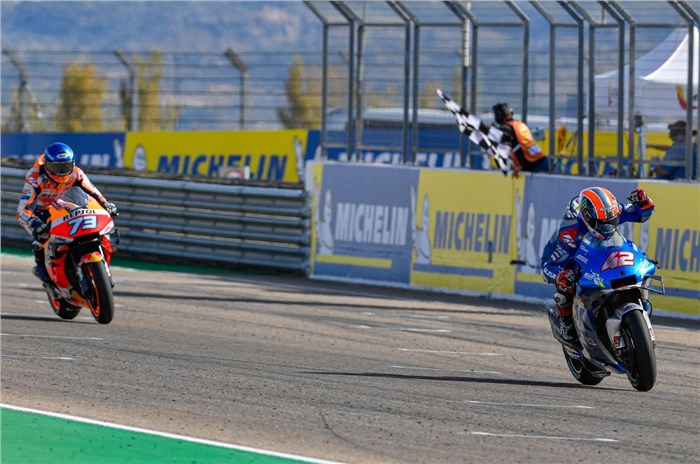 Alex Rins, of Team Suzuki Ecstar, put up an unexpectedly brilliant performance to clinch his first victory of the 2020 MotoGP World Championship.

As the lights went out, Alex Rins made a brilliant start from 10th on the grid, managing to overtake a bunch of riders in the opening set of corners. He went up to 4th on the opening lap itself, and soon set his sights on the Yamahas of Maverick Vinales and Fabio Quartararo.

With each passing lap, it became clear that Fabio Quartararo was struggling for grip in the early stages of the race. And Rins was right there to capitalise on his issues. With Quartararo behind him, Rins began steadily chopping the gap to race leader Maverick Vinales. A few laps later, Maverick too was finding it difficult to lay down the power of his YZR-M1, owing to tyre troubles. In one swift move, Alex Rins overtook Vinales on Lap 8 to move into the lead of the race and from then on, he was cruising comfortably until the last few laps.

Aragon and the Marquez name appear to have a powerful connection, as Alex Marquez seemed to be riding in his element. The Spaniard pulled some brilliant moves on the inside of his competitors, with a renewed faith in his Repsol Honda machine. In fact, he was so good that, at one point, he looked close enough to snatch the victory from Rins. That said, tyre life in the closing stages was a worry for Marquez and Rins, with both riders struggling for grip. The ever-smooth Rins, however, had everything under control and managed to fend off the challenge from Marquez, who crossed the line a mere 0.2sec behind.

While Alex Rins' victory was one cause for joy in the Suzuki camp, Joan Mir's 3rd place finish was the other. Mir leads the 2020 MotoGP World Championship, with 121 points. This is the first time that a Suzuki rider is leading a MotoGP championship after  Kenny Roberts Jr did in 2000.

Quartararo, who had a weekend to forget, is 2nd in the championship with 115 points, while Vinales is third with 109 points in his kitty. With four races to go, the championship is surely going to go down to the wire.

The next round of the 2020 MotoGP world championship will be held at Motorland Aragon on October 25, 2020.