Several falls followed towards the end of the race and it became an all Italian battle for victory. 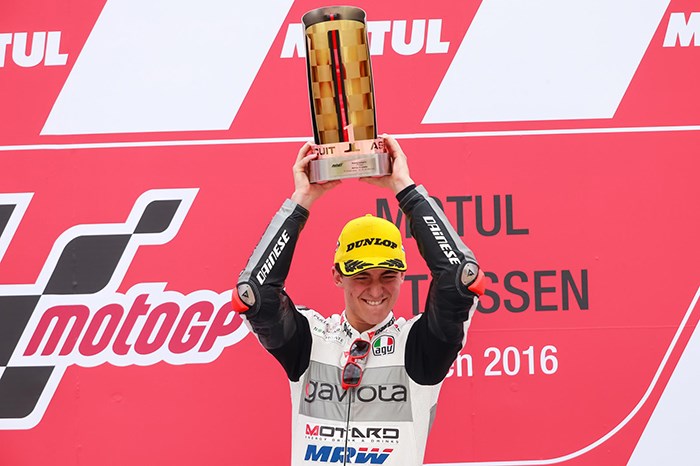 Despite having threatened all weekend, the rain stayed away for the Moto3 World Championship race in Assen. A classic race followed as a group of 13 riders battled for the lead for most of the race, Francesco Bagnaia (Aspar Mahindra Team Moto3) holding his own towards the head of the group.

In true Assen style it was all about the last chicane, ‘Pecco’ playing it perfectly to carry as much corner speed as possible and slip through like a hot knife through butter.

His run allowed him to take victory by 0.018s, walking to the top step of the podium for the first time in his career. It was also a special moment for Mahindra who have now claimed their first win in the World Championship, becoming the first manufacturer other than Honda or KTM to win a race in Moto3.

Mahindra joined the lightweight class at the end of the 125cc era in 2011, in 2013 they took to the podium for the first time with Miguel Oliveira in Sepang. After the win Bagnaia moves to fourth in the championship, ahead of Nicolo Bulega (SKY Racing Team VR46).

“I am very happy, I can't believe it because it was very hard to stay at the front today. I have managed to set a fast pace all weekend even though in qualifying it was difficult to set a fast lap because of the amount of slow riders on track”, said Bagnaia.

“To win by just 0.018 seconds is incredible. In the race I managed to be quicker in the final sector than I managed in practice and I knew that if I was third in the penultimate sector I had a chance to overtake and win. This win has come on the back of a lot of hard work, two years of working to be stronger and more consistent”, he added.