The German was the faster of the Mercedes duo on the first runs in the Q3 top 10 shootout, shading Lewis Hamilton by 59 thousandths of a second. 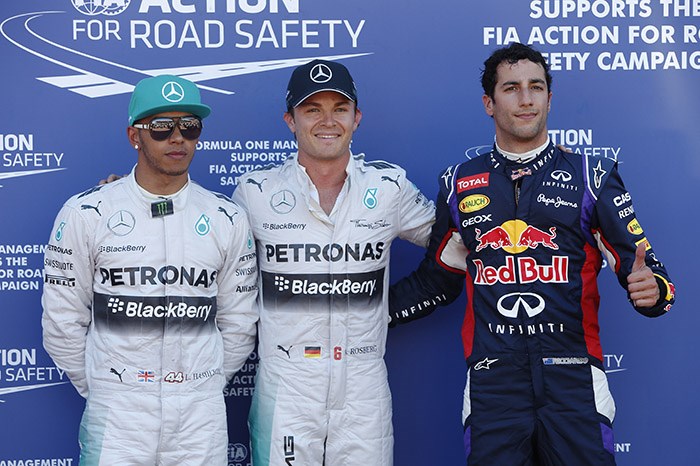 The German was the faster of the Mercedes duo on the first runs in the Q3 top 10 shootout, shading Lewis Hamilton by 59 thousandths of a second.

He then made a mistake on his final flier, locking up and sliding up the escape road at Mirabeau.

But as Hamilton, who was behind Rosberg on track, was slow in the middle sector of his final lap because of the resulting yellow flags, the Briton was unable to attempt to defeat Rosberg.

The second Toro Rosso driver, Daniil Kvyat, impressed by surviving a crash in Q1 at the chicane that ripped off his front wing by making it to Q3 in ninth, ending up ahead of Sergio Perez.

Jenson Button, winner in Monaco in 2009, was the biggest-name casualty in Q2, ending up 12th behind Force India's Nico Hulkenberg.

Williams driver Valtteri Bottas was 13th, with Romain Grosjean and Pastor Maldonado behind him as the Lotus team continued to have a difficult weekend.

Felipe Massa ended up only 16th after being unable to participate in Q2.

The Williams driver let Caterham driver Marcus Ericsson through at Mirabeau in the closing stages of Q1, but the Swede had to correct a rear-end slide under braking for the right-hander and hit Massa, who was holding a wide line.

Both cars nosed into the barrier and neither was able to get back to the pits, although Massa did get his car going again but then ground to a halt.

The tangle will be investigated by the stewards after the session.

This incident meant that the battle to avoid elimination in Q1 was interrupted and there were few late changes, with Sauber pairing Esteban Gutierrez and Adrian Sutil ending up 17th and 18th.

Marussia pairing Jules Bianchi and Max Chilton filled the 10th row, with the Caterhams of Kamui Kobayashi and Ericsson at the back.

The stewards are also investigating several cases of impeding from Q1, one involving Perez and Gutierrez and the other involving Maldonado and Kvyat.