Any prospect of a major incident between the two drivers was dispelled shortly after the start, as Rosberg aced his getaway from pole. 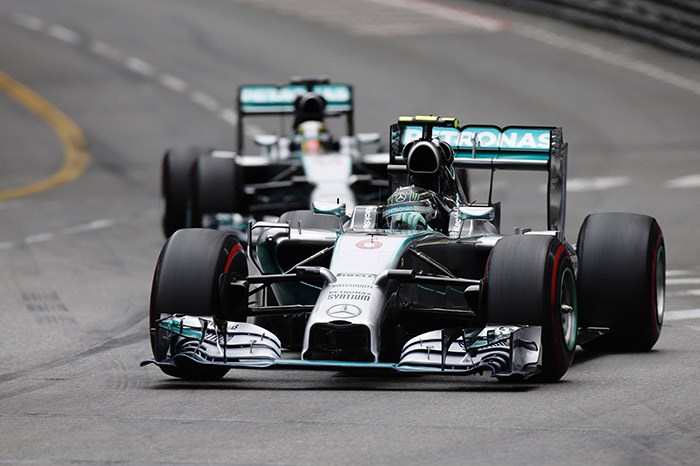 Nico Rosberg reclaimed the lead of the Formula 1 world championship from Mercedes team-mate Lewis Hamilton by beating him to victory in the Monaco Grand Prix on Sunday.

Talk in the build-up to the race centred on whether the rivalry between the two Mercedes drivers might explode on-track, after the controversial conclusion to qualifying on Saturday.

But any prospect of a major incident between the two drivers was dispelled shortly after the start, as Rosberg aced his getaway from pole and led Hamilton safely through Ste Devote for the first time.

The race was almost immediately neutralised by the safety car, as Sergio Perez's Force India looped into the barriers at the exit of Mirabeau after a collision with Jenson Button's McLaren.

Rosberg held Hamilton back at the restart and edged away slowly through the first stint as his team-mate gave chase.

A second safety car period, caused by Adrian Sutil crashing heavily under braking for the chicane, robbed Hamilton of his only realistic opportunity to pass Rosberg by pitting earlier than his team-mate.

Both Mercedes dived for the pits one after the other under the safety car, allowing Rosberg to retain the lead.

The 2008 F1 world champion questioned his team's strategy repeatedly over the radio as the drivers prepared for another restart.

Once again Rosberg controlled the restart well, and drove on unchallenged to victory, despite fears over excessive fuel consumption in the early part of the second stint.

Hamilton shadowed his team-mate for most of the rest of the race, but dropped back in the closing stages after complaining he "couldn't see" out of his left eye.

Red Bull's Daniel Ricciardo smelled blood and closed Hamilton down, but fell short of beating the Brit to second place by just 0.4 seconds.

The Australian thus had to be content with his second consecutive third placed finish.

He had earlier made a slow start from third on the grid, but regained the lost ground thanks to problems for his team-mate Sebastian Vettel and Ferrari's Kimi Raikkonen.

World champion Vettel ran third initially after a strong start from the second row, but reported a loss of power shortly after the first restart.

Red Bull replaced parts of his Energy Recovery System unit before the race, following the ERS issue that hampered Vettel in qualifying, and the German complained of a loss of boost pressure from his Renault engine in the race.

A frustrated Vettel rejoined the action after some adjustments in the pits, but was told by the team to retire his car.

Raikkonen then looked as though he might claim his first podium since returning to Ferrari, having got up to fourth by passing his team-mate Fernando Alonso at the start and driving around the outside of Ricciardo's Red Bull on the first run through Ste Devote.

But the Finn's race was undone by contact with Max Chilton's Marussia during the second safety car period.

Chilton was trying to un-lap himself, and the resulting collision forced Raikkonen into a second stop to repair some minor damage to his F14 T.

This condemned the 2007 world champion to a recovery drive through the field, while Alonso maintained his third position in the world championship by finishing a lonely fourth.

Raikkonen ultimately ended up pointless after a botched pass on Kevin Magnussen's McLaren at Loews with a handful of laps remaining.

Magnussen had just been passed by team-mate Jenson Button as Hamilton and Ricciardo lapped a battle for fifth between Hulkenberg's Force India, the two McLarens, and Raikkonen's Ferrari.

Raikkonen spotted a chance to dive down the inside at the hairpin, but ran out of road, meaning both drivers lost ground.

Hulkenberg thus held on grimly to claim fifth for Force India, narrowly ahead of Button, while Felipe Massa inherited seventh for Williams.

Engine failures for Valtteri Bottas (Williams) and Jean-Eric Vergne (Toro Rosso), plus a crash for Esteban Gutierrez (Sauber) at Rascasse, and the incident between Raikkonen and Magnussen, meant Jules Bianchi crossed the line an unlikely eighth for Marussia.

A five-second penalty for serving an earlier penalty for an out-of-position start under the safety car, means he will be demoted to ninth, nevertheless scoring Marussia's maiden points in Formula 1.

The Lotus of Romain Grosjean will thus inherit eighth, while Magnussen recovered from his incident with Raikkonen to round out the scorers in 10th.