Schumacher leads the championship with 75 points ahead of Aron (72) and Mawson (61). 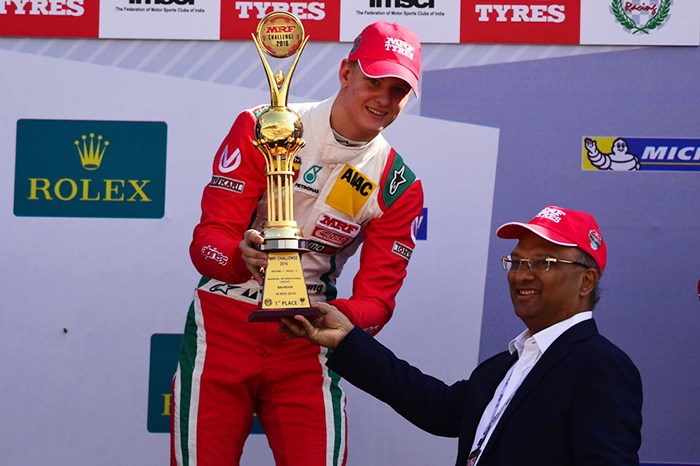 For the first race of the day, Schumacher started from the front row alongside Brazilian rookie Felipe Drugovich, who was on the reverse grid pole position. Schumacher had a great start and took the lead going into Turn one, with Drugovich managing to hold off Race one winner Newey and Aussie driver Mawson.

It was just a matter of time before both drivers passed Drugovich, while Aron recovered from a poor start to also quickly start catching the lead bunch of drivers. Schumacher pulled away while Newey had Mawson all over him and on lap three he passed him to move into 2nd place. Aron set some fast lap times to close in on Newey. Schumacher crossed the finish line comfortably in 1st place to take his maiden MRF Challenge win ahead of Mawson. Aron was on Newey’s tail and overtook him on the last lap to take the final podium spot, with the pair being separated by a mere 0.016s. Drugovich finished in 5th place ahead of Kimi Schramm and Dylan Young.

Mick Schumacher was happy to get his challenge off to to a great start. He said, "I am happy with the overall start to the championship. In the last race I felt it was important to get past Juri Vips soon in order to get the win. The circuit was enjoyable to drive on and I now look forward to the next race in Dubai.”