Mercedes clinch constructors’ title at US GP with Hamilton win 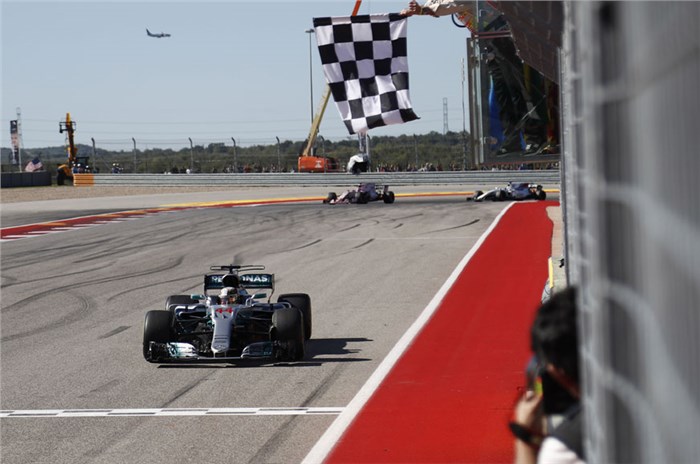 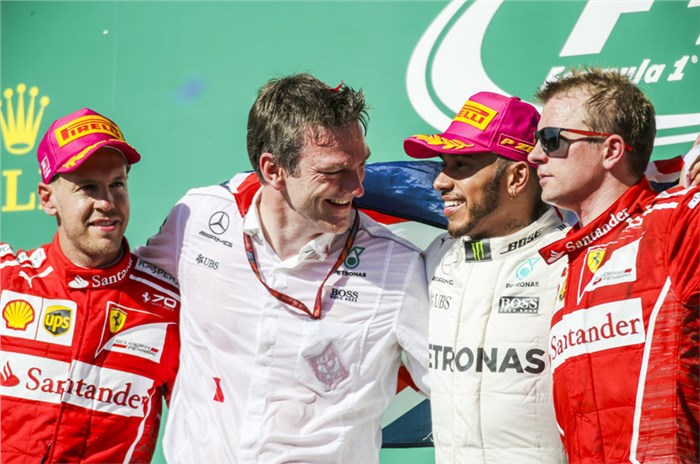 Lewis Hamilton moved closer to his fourth Formula One world championship with a commanding victory in the United States Grand Prix at Austin. The Mercedes driver lost the lead to F1 title rival Sebastian Vettel at the start, but got back past the Ferrari driver early on to clinch his ninth win of the season and fifth in six attempts at the Circuit of Americas.

Vettel finished second, 10.1sec adrift, and now trails Hamilton by 66 points with only three races remaining. Max Verstappen snatched third from Kimi Raikkonen with a sensational pass on the final lap of the race. However, he was given a five-second penalty for leaving the track and gaining an advantage when completing that pass, which demoted him to fourth with Raikkonen promoted back to third.

Vettel made a great start from second on the grid to dive up the inside of Hamilton into Turn 1, despite the Mercedes driver’s efforts to defend the line. Hamilton reported that his tyres felt good and after a couple of laps had got back within DRS range before launching an attack down the back straight. The Mercedes nipped down the inside to take the position and though Vettel attacked through the twisty section that followed, Hamilton held him off.

Vettel pitted at the end of lap 16, swapping the ultra-softs for softs, but Hamilton chose to stay out three laps longer before pitting for fresh rubber. Vettel then set a series of fast laps, but ran wide at the penultimate corner as Hamilton pitted, with the Mercedes emerging from the pits just ahead into Turn 1 to stay ahead.

Max Verstappen ran a long first stint, having started 16th, and rose through the field to take the lead as others made their stops. Hamilton quickly caught the Red Bull driver and used DRS to make the pass on cut back at Turn 14 to retake a lead he would not relinquish.

Verstappen pitted at the end of lap 24, taking the soft tyre and rejoining fifth. Red Bull then went aggressive by pitting him for a second time 13 laps later. The Dutchman took the super-softs and stayed fifth, such was the gap to Esteban Ocon behind, with Vettel responding and taking the same compound, rejoining fourth.

That promoted Bottas to second with Raikkonen third, but the Mercedes driver was struggling for pace and after a series of attacks; Raikkonen finally made one stick at the end of the back straight to snatch second. Vettel used fresh tyres to close back up to Bottas, passing the Mercedes driver around the outside of Turn 1 to take third with five laps to go.

Raikkonen was informed by his team that Vettel was now the car behind and promptly moved over at Turn 1 to allow his teammate to take second. He then lost third in the final sequence of corners when Verstappen dived down the inside of the long right-hander on the final lap only to be given the position back, following the Red Bull driver's penalty.

It was a bad day for Verstappen's teammate, Daniel Ricciardo, who retired early on – having had a great battle with Bottas for third – with a suspected engine problem. Ocon absorbed pressure from Carlos Sainz Jr to hold on to sixth, with the latter scoring points on his first start for Renault in seventh.

Sergio Perez, who was frustrated with his Force India team when he felt he was being held up by Ocon midway through the race, ended up eighth with Felipe Massa and Daniil Kvyat completing the top 10.

Nico Hulkenberg retired after suffering a loss of oil pressure, while Fernando Alonso's race was ended with an engine problem.

Pascal Wehrlein also failed to finish after contact with Kevin Magnussen at the start while his Sauber teammate finished 15th, having incurred a 5.0sec penalty for causing a separate collision with Magnussen.