McLaren to switch to higher nose in Spain

The Woking squad first trialled the new design on the final day of the Mugello test. 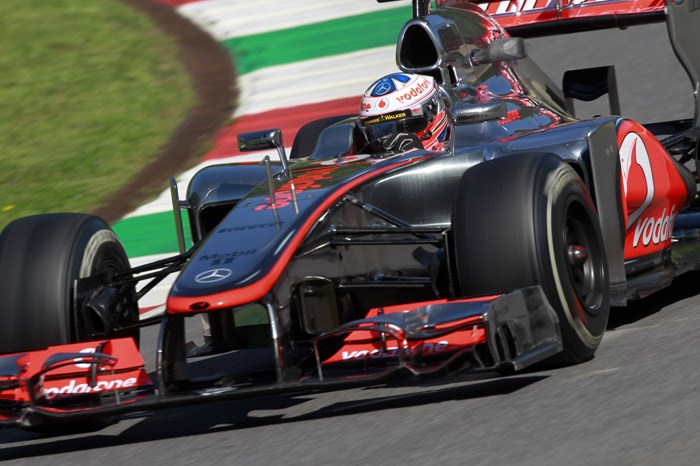 Team principal Martin Whitmarsh says McLaren is likely to switch to the new high nose design it trialled on the final afternoon of in-season testing at Mugello.

The new nose is far higher at the front than the original design, and features significantly longer pillars - effectively bringing it far closer to the stepped designs used by the rest of the field.

While McLaren only trialled the high nose in the final hours at Mugello, Whitmarsh said during a Vodafone phone-in on Wednesday that the team would run the design again in Barcelona, and that it was reasonable to expect it to remain on the car for the race.

"There's a reasonable chance we will see it on Sunday, which will be the first time our drivers experience it," Whitmarsh said.

"We got a lot of feedback from Mugello, so we have the data to set it up and can find the performance on track."

Asked about the philosophy behind the new design, Whitmarsh said the higher nose helped manage the airflow directed to the rear of the car.

"Classically of course you are looking for lower drag and higher downforce, but be aware that nowadays incremental improvements are generally modest," he said.

"In the case of the nose and front wing the attachment pylons are quite different and there are other subtle differences.

"You are managing the airflow that is enjoyed by the rest of the car. Nowadays, in quite a critical part of the car you are looking to find very small improvements. [There are] a lot of restrictions around the back end of the car, so you generate more improvement by managing the flow that arrives there than by developing the rear itself."

Whitmarsh said he expected McLaren to prove competitive once again after its poor showing in Bahrain, but said it was impossible to be fully confident given how competitive 2012 has proved.

"I believe we will be competitive in Spain and going forward, but you don't know what other teams are going to do," he said. "I think great thing about this sport is you can never been fully confident you understand everything.

"[We] have a car clearly able to be on front row in each of the first four races and therefore the pace is inherently there. We are working to continuously develop the car, but you can never be confident that other teams won't up their game and give you harder time.

"We had an interesting data gathering test at Mugello, and we will see at Barcelona but we expect to put that knowledge to good use."