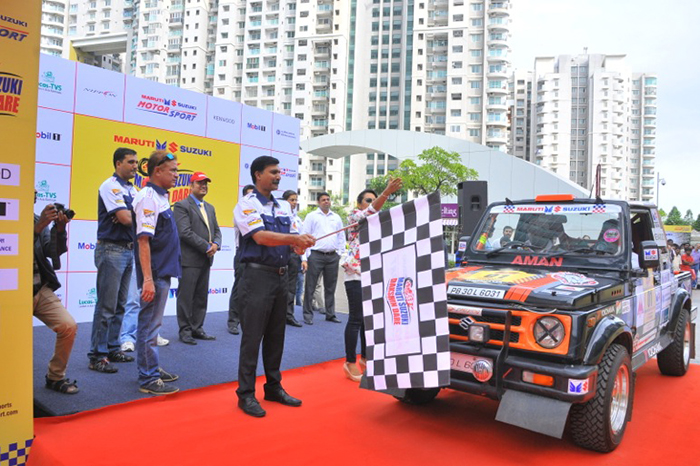 The sixth edition of the Maruti Suzuki Dakshin Dare was flagged off in Bangalore, with the seven day event slated to cover over 2000 kilometres across Karnataka and Goa.

Earlier in June, a controversial rule change had seen the event prohibiting any vehicle above 1600cc capacity from competing in the event – which seemed squarely aimed at ruling out the participation of the dominant Mahindra XUVs.

Suresh Rana, nine-time Raid de Himalaya winner and three-time Desert Storm winner will be gunning for his first Dakshin Dare win, piloting a Maruti Gypsy instead of his regular Grand Vitara given the cubic capacity limit.

A total of 95 vehicles are slated to start the rally, including cars in Ultimate and TSD categories along with bikes in Ultimate category.

Starting from Bangalore, the rally will traverse the towns of Mysore, Shimoga, Chitradurga, Davangere, Bellary, Hospet, Hubli before culminating in Goa on August 10.

“Like wide range of cars, we have several rally formats suited for amateurs and professionals. Historically, our cars have done well and we are proud of their consistent performance.”