Marquez has become an eight-time world champion after successfully defeating Quartararo to win the Thai GP. 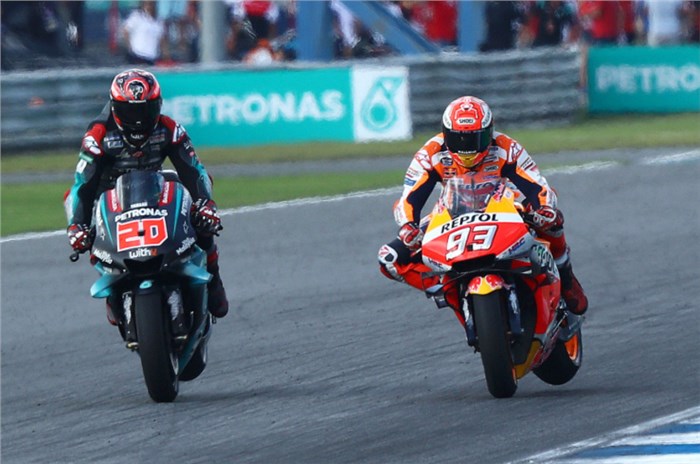 At just 26 years of age, Marc Marquez has now become the youngest ever rider to win six MotoGP premier class titles, after successfully defeating Fabio Quartararo in a thrilling final corner showdown to win the Thai GP and wrap up the 2019 MotoGP title. This also marks the Honda rider’s eighth world championship victory.

Heading into the race, Marquez only needed to outscore Ducati’s Andrea Dovizioso by two points to clinch the title. However, instead of playing it safe, the Honda rider seemed as determined as ever to cross the finish line in first place. Polesitter Fabio Quartararo, who was gunning to secure his first victory, enjoyed a strong start, while behind him, Marquez was able to move up to 2nd place. The two then spent a majority of the race in close proximity, trading fastest laps several times. All the while, Marquez was setting himself up for an attack in the closing stages of the race.

Marquez finally showed his hand on lap 23, passing Quartararo at Turn 3. But he then ran wide, which allowed Quartararo to re-take the lead. This set the stage for a nail-biting final lap. Marquez once again tried to pass Quartararo at Turn 3 and this time around, he was able to make the move stick. But Quartararo refused to back down, and launched an attack at Turn 12. However, Marquez was able to outpace the Petronas Yamaha SRT rider on the run to the finish line to win the race. “I was planning the weekend to try to win the race. It doesn’t matter the championship, it doesn’t matter the distance between me and Dovi (Dovizioso). My target was to try to find the best way to win the race and that’s what I did,” said an ecstatic Marquez after the race.

As a result, Marquez has been able to wrap up the 2019 MotoGP title with four rounds yet to go – a testament to just how strong of a season it’s been for him. So far, he’s managed to finish on the podium in 14 out of 15 races, clinching nine race victories along the way.

Maverick Vinales dropped out of contention to win the race early on after strolling with a full fuel load in the initial laps, and he had to settle for 3rd place. Behind him, Dovizioso was able to hold on to 4th place, while Alex Rins finished 5th after passing Franco Morbidelli on lap 15. Joan Mir secured a 7th place finish, followed by Valentino Rossi and Danilo Petrucci. Meanwhile, Aleix Espargaro’s retirement prompted Takaaki Nakagami into the top 10.