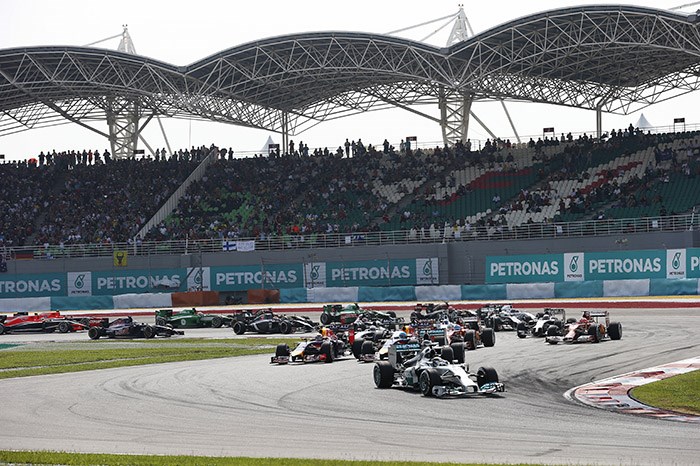 Lewis Hamilton sparked his 2014 Formula 1 season into life by dominating the Malaysian Grand Prix on Sunday.

The 2008 world champion made up for the disappointment of early retirement from the season-opener in Australia earlier this month by comfortably beating Mercedes team-mate Nico Rosberg to victory by 17 seconds at the Sepang circuit.

He jumped reigning world champion Sebastian Vettel off the line and successfully repelled both Red Bulls after a massive tank-slapper coming through Turn 3 on the first lap.

He reported struggling with his rear tyres in the early stages and could not keep pace with Hamilton, who eked out an early and decisive lead before racing on to record the 23rd grand prix win of his career.

Rosberg finished a comfortable 7.2s clear of third-placed Vettel, who put his first championship points on the board after his own early retirement in Australia.

The Red Bulls were side-by-side through the opening sequence of turns, as Vettel's team-mate Daniel Ricciardo went round the outside at Turn 2.

Rosberg's massive wobble coming though the long sweeping right-hander at Turn 3 allowed the reigning world champion to come back at his team-mate briefly, but Ricciardo held firm, only to be passed on lap four when Vettel slid up the inside at Turn 1 unchallenged.

Ricciardo had to get his elbows out again after the first round of pitstops, successfully rebuffing the efforts from Fernando Alonso to pass as he rejoined. The Red Bull prevailed over the Ferrari after more side-by-side action through Turns 1, 2 and 3.

But this proved a moot point ultimately, as Ricciardo suffered a botched late pitstop that required mechanics to push his car back to the Red Bull pit to refit the left front wheel correctly.

He rejoined the race, but then suffered a front wing failure on the start-finish straight, having broken it by running wide out of Turn 14 coming onto the back straight. He retired shortly afterwards.

Ricciardo's misfortune promoted a personal duel between Alonso and Nico Hulkenberg, in which the Spaniard again prevailed to take fourth.

Hulkenberg's Force India used an unconventional two-stop strategy to get ahead of the Ferrari, but ultimately Alonso used the advantage of fresher tyres to get ahead in the closing stages.

Jenson Button completed a stealthy climb from 10th on the grid to complete the top six, ahead of the duelling Williams of Felipe Massa and Valtteri Bottas.