The 16 year old from Mumbai, driving in Sahara Force India colours for Fortec Motorsport, put in a sterling qualifying to start from P3. 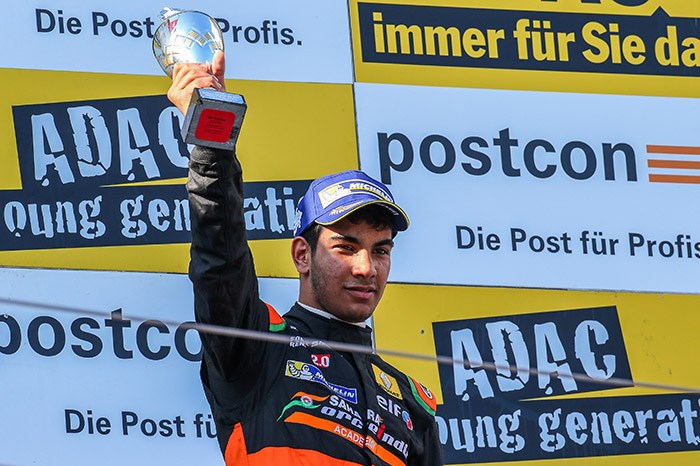 The 16 year old from Mumbai, driving in Sahara Force India colours for Fortec Motorsport, put in a sterling qualifying to start from P3 for the first race of the weekend and the best rookie. As the lights went out, he made no mistake getting off the line. Japanese driver Sasahara gave Jehan a run for his money into turn one, and Jehan fought hard to retain his position. Unfortunately he managed to lock up his front wheel under braking, causing a massive flat spot on the tyre.

Over the next few laps, Jehan put in consistent laptimes to pull away from Sasahara, who in turn kept falling back due to his battle with Callan O’Keeffe. The Japanese was ultimately overtaken by O’ Keeffe, who began closing the gap to Jehan by more than 0.6 seconds a lap, due to Jehan suffering from the flat spotted tyre.

With less than 10 minutes left to the finish, Jehan had his mirrors filled with O’Keeffe. The duo fought hard for the next few laps as O’Keefe passing Jehan looked imminent. He made multiple attempts to get alongside the Indian, but without much success. However, Jehan showcased some brilliant and intelligent defensive driving to keep O’Keeffe behind him all the way to the chequered flag, to earn his maiden overall podium.

“I had a good car and made a good start. Unfortunately the front locked up and I flat spotted the tyre, which affected me throughout. The last couple of laps were tough and I enjoyed the close racing. Team Fortec and Sahara Force India Academy have been my biggest support, for which I am very thankful” said Jehan.

In race two, Jehan was looking set for another podium as he moved up to second place but eventually crossed the line in fourth after losing out to Swiss driver Deletraz followed by teammate Alex Gill.

Race three was a forgettable affair, as a contact on the first corner put him out of contention.